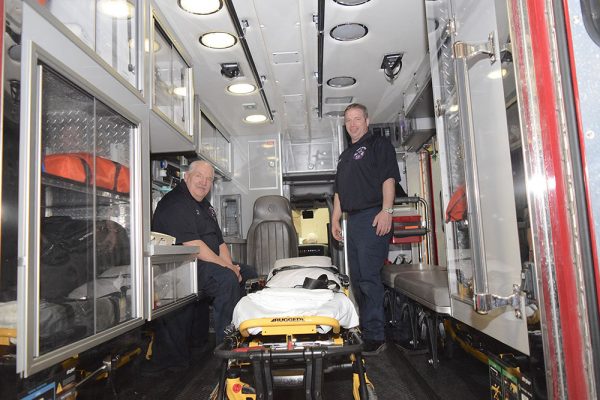 EMT Terry Whiteside (left) and Paramedic Kevin Peloquin in a well-equipped ambulance that is one of three new vehicles that make up Port Clinton’s EMS operation, which made its debut in April. The ambulances were purchased from Danbury Township and Lakeside, and are in excellent condition, said Fire Chief Kent Johnson. (Photo by D’Arcy Egan)

The City of Port Clinton established its own EMS operations last April, and has partnered with neighboring Bay and Portage township fire departments to take over their EMS operations, as well. Now Catawba Township, which has struggled in recent years in maintaining its EMS force, wants to ink a contract with Port Clinton for emergency ambulance services.

The communities already work hand-in-glove with one another, which was evident on Monday afternoon when Port Clinton fire crews helped Danbury Township crews to fight a fire. Catawba Township fire crews were on standby, in case they were needed elsewhere in the area should there be another fire.

“We still have to go through the long, drawn-out process necessary to provide EMS services to Catawba Township,” said Fire Chief Kent Johnson. “We had a second reading of the ordnance to enter into a contract with Catawba Island Township at Tuesday night’s Port Clinton Council meeting.”

Port Clinton has also introduced an ordnance to enter into a contract to furnish fire protection for Portage Township. It also had its second reading on Tuesday night. Both ordnances will have a final reading at the Port Clinton Council Meeting on Sept. 24 at 7:30 p.m.

At a public meeting of the Catawba Island Township Trustees recently, Chairman William J. Rofkar explained the need for Port Clinton to take over the EMS operations.

“Our department, as most departments both locally and nationally, has struggled recruiting as well as retaining members for a number of reasons,” said Rofkar in a prepared statement.

The long list of problems in maintaining an EMT force included volunteers who have aged. The township now handles twice as many calls as it did in the 1980s, but with half the EMS members. The township residents have also aged, making it harder to get new recruits. Training for certification and continuing education requirements have significantly increased.

Catawba Township has tried offering a pay-per-run system to compensate its volunteers, and not requiring EMT’s to be firefighters, but has still struggled to find volunteers.

The Port Clinton staff will be as well or better trained and response times should be similar, wrote Rofkar, and will be more economical for the township. No levy will be required to fund the transition to Port Clinton, and the Catawba Island Township Fire Department will remain, responding to township EMS calls as First Responders and provide support for the Port Clinton EMS.

Port Clinton’s EMS operations were taken over 15 years ago by regional North Central EMS is a cost-cutting move. When its rates were significantly increased last year, Port Clinton created its own EMS services and Bay and Portage townships contracted to use Port Clinton’s new service.