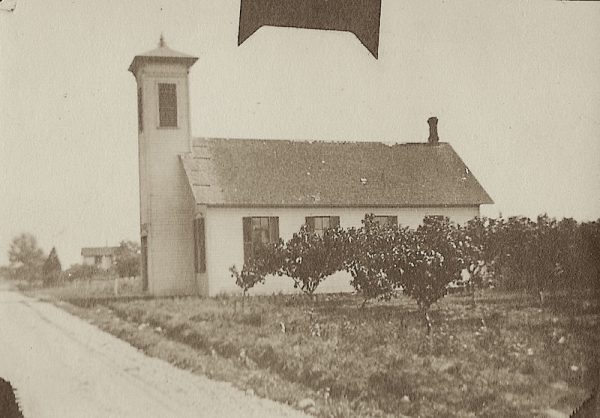 Because of the foresight of the Catawba Island Township trustees in saving the iconic Union Chapel in 1992, now home to the Catawba Island Historical Society Museum, the structure has been awarded National Register status. This photo was taken in 1930.

When Samuel and Louise Armstrong donated property at the north end of Catawba Island to begin the 1887 construction of a Sabbath School for area children, they could not have known the building at 5258 E. Porter Street on Catawba Island would still be standing more than 130 years later, let alone that it would be selected for the prestigious National Register of Historic Places.

Barb Powers, head of Inventory and Registration of the Ohio State Preservation Office, announced that Union Chapel was added to the Registry on March 8. Application for being listed was submitted jointly by the Catawba Island Township Trustees and the Catawba Island Historical Society in late September 2020.

Brown noted that investigating the possibility of National Register status for the Chapel dates back almost three decades, but that detailed research and formal application didn’t begin until last fall.

“Catawba Island Township deserves a great deal of credit for electing to maintain the building rather than razing it when they assumed its ownership in 1992,” observed Brown. “They even put a new roof on the structure rather than allow it to fall prey to time and the elements. In my experience, I didn’t often see this type of foresight and recognition of historic value by municipal governments.

In 2017 the Catawba Island Historical Society was formed to help preserve and protect local heritage. Island residents Don and JoAnn Rhodes offered to donate a variety of representative artifacts if a suitable home for their collection could be secured.

The Township put $50,000 into renovating Union Chapel and leased it to the Historical Society for opening a museum there to curate and display such antiquities.

The Chapel itself is as historically significant as the antiquities it houses. In the NRHP application, Brown noted that, “Religious education played an essential role in the life of Catawba Island’s peach-growing community, and the nonsectarian Union Chapel, constructed as the expansion of peach orchards on the island accelerated, was the center of Catawba Island social and religious life.

“It is today the sole surviving religious and community building representing the formative years of Catawba Island’s history,” said Brown.

There are now three Catawba Island properties on the National Register of Historic Places. In addition to Union Chapel they are the Gideon Owen Winery building – which was listed when called Mon Ami Restaurant and Historic Winery – and the Betsy Mo-John cabin.

The Union Chapel application was unique because of being made by a municipality, rather than a private owner.

The National Register of Historic Places was established in 1966, with passage of the National Historic Preservation Act, as a planning tool to insure that federal funds were not used to adversely affect historic properties. It is a listing of buildings, sites and structures, either individually or as parts of historic districts, that are considered significant for their association with broad patterns of history, association with historic people, architecture, or archaeology.

Being listed on the Register has since acquired a measure of prestige as designating the properties most deserving of recognition and preservation.

President Craig Koerpel of the Catawba Island Historical Society which operates its museum at the Chapel, has planned a brief ceremony to commemorate the building’s new status. It will be conducted at at Union Chapel on Saturday, May 8, at noon, the day the museum opens for its fourth season.

Koerpel said the Society has also begun its 2021 membership drive.

“We are hopeful that attaining National Register status will attract new members, as well as raise awareness that Catawba Island has a unique and significant story to be told,” said Koerpel. “Dues from Society membership provide Museum operating funds that allow us to share that story with residents and visitors.”

Although establishing precautionary operating practices because of the Covid-19 pandemic caused a delay in its 2020 opening, Catawba Museum at Union Chapel still hosted more than 500 guests before closing for the season in mid-October. For those who were unable to visit last year both an “introduction” and a “comprehensive” video tour are available at the “Events” tab on the Historical Society’s website, which is www.catawbaislandhistoricalsociety.com.

Additional information about becoming a member is also on the website or can be obtained by calling the museum at 419-967-5363.