CBS’s Hartman and The Lettermen entertain at Lakeside 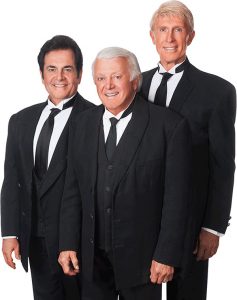 Steve Hartman, Emmy Award-winning “CBS News” contributor and longtime Lakesider, will return to Lakeside’s Hoover Auditorium at 8:15 p.m., Tuesday, July 23, to share stories featuring youth who have made a difference in the lives of others. Hartman travels the country for his weekly CBS feature, “On the Road.”

Hartman is known for his award-winning series, “Everybody Has a Story,” in which he would throw a dart at a map and randomly choose an interview subject from the location’s local phone book. He upped the series to a global scale in 2010 with “Everybody in the World Has a Story.” He worked as a columnist for “60 Minutes Wednesday” and as a correspondent for CBS’s “Public Eye with Bryant Gumbel” and “Coast to Coast.”

On Friday, July 26, the iconic lettermen sweaters may only make a brief appearance at 8:15 p.m., in Lakeside’s Hoover Auditorium, but the signature harmonies of The Lettermen trio will leave listeners wanting more. The performance will include oldies such as “The Way You Look Tonight” and “Put Your Head on My Shoulder,” as well as current hits of today.

With more than 10,000 sold-out shows and 10 Gold albums under their belt, The Lettermen appeal to generations of music lovers. Singer Tony Butala (still with the group today), Jim Pike and Bob Engemann became one of the top concert acts of the 1960s. Through the 1970s-90s, and now into the year 2019, The Lettermen have continued to release albums and travel the world.

The doors to Hoover Auditorium open a half-hour prior to the start of performances. Seats are available on a first-come, first-served basis. Admission and parking fees apply. Purchase Chautauqua Passes in advance at www.lakesideohio.com/admission or upon entering the gates of Lakeside. Passes must be presented at Hoover Auditorium.