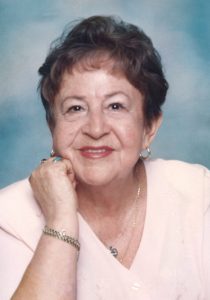 Celia Leticia Erebia, formerly Celia Leticia Duran Reyes, 84, of Port Clinton, died in her home on Tuesday, June 2. She was born on February 12, 1936, in Saltillo, Coahuila de Zaragoza, Mexico, the daughter of the late Melchor Duran Sanchez and Evelia Reyes Herrera. She is a descendant of the De Los Reyes (Reyes) family, one of the original ten families who founded the town of San Antonio de las Alazanas, Coahuila de Zaragoza, Mexico.

On September 11, 1957, she married her first and only love, the late Federico Erebia Sr., in Reynosa, Tamaulipas, Mexico. They made their home in Port Clinton and raised their thirteen children. She was a member of Immaculate Conception Catholic Church in Port Clinton. She loved her large family, sewing, crochet, crafts, Mexican music, dancing, gardening, and flowers, especially her roses and geraniums. She enjoyed traveling and visiting her out-of-state children and relatives. She loved the beauty of the ocean and the mountains of California. She loved cooking for her family. She enjoyed shopping (she loved a good deal) and spending time with her 30 grandchildren and 6 great grandchildren. She took great pride in watching her grandchildren participate in sporting events and music recitals.

Although she was Mexican by birth, she became a naturalized U.S. citizen on November 16, 1973. She loved this country and her adopted hometown of Port Clinton which, she said, she would never abandon. She loved her “pueblito” too much. She had an infectious laugh and her smile could light up a room. A jokester at heart, she loved to make her family laugh. Her sense of humor lives on in each of her children. She will be missed by all who were fortunate enough to have known her.