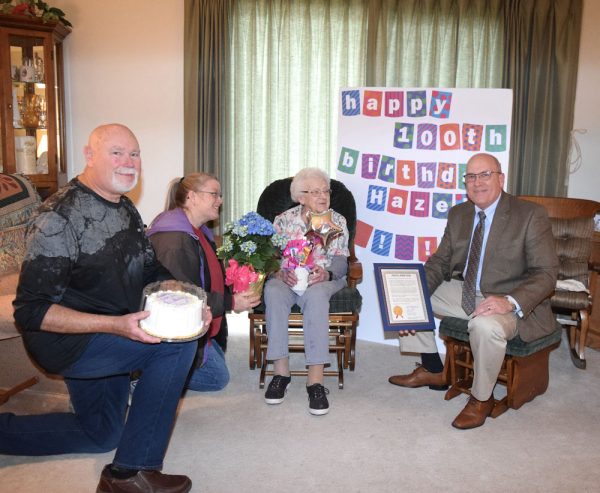 Hazel Franck of Oak Harbor plays a mean game of pinochle, and Darrell Gress of Port Clinton is hard to beat at dominoes or euchre. Both have lots of younger friends and family who were eager to help them celebrate their 100th birthdays last weekend.

“You would never guess that Hazel and Darrell were that old,” said Diane Mortenson, Director at Ottawa County Senior Resources in Oak Harbor. “They’re both so active, and both are looking forward to what’s yet to come in their lives.”

The odds are long for reaching the age of 100, but both centenarians have steady social routines and a good diet to follow that keeps them young. Living in smaller towns has its perks, said Mortenson. Both

Franck, who has lived for 100 years in Oak Harbor and Port Clinton, and Gress, who resides in the Nugents Canal Community in Port Clinton area, have both been inducted into the Ottawa County Senior Hall of Fame.

Franck’s husband, Orlan “Lee” Franck, died years ago. Family members include her daughter and son-in-law, David and Ann Borer of Tiffin, Ohio; and Bill Franck and his wife, Nancy, of Egin S.C. Grandchildren are Hollie and Jennifer Borer of Tiffin, Todd Franck of Charleston, S.C. and Mark Franck of Longmont, Col.

The family hosted a birthday celebration for Franck on Sunday, April 24 at St. John Evangelical Church in Oak Harbor.

Franck raised her children and worked at a fruit stand near her Oak Harbor home. She was proud of the quilts she created for residents at the Riverview Health Care Campus in Oak Harbor, served as a 4-H leader and was treasurer at the Harbor Lights Senior Center in Oak Harbor, a popular social facility for seniors. 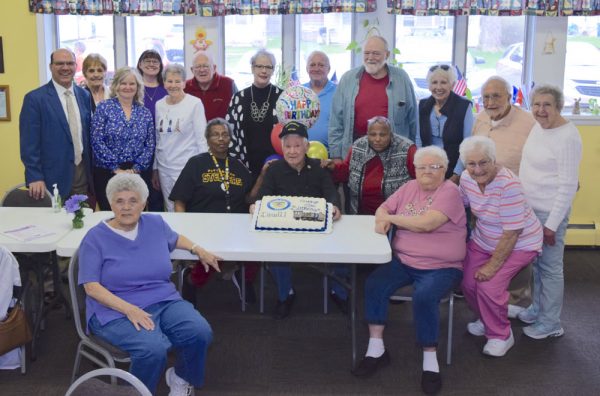 A big batch of friends were on hand on Friday morning at the Port Clinton Senior Center to cut Darrell Gress’s cake after a few games of dominoes, including Ottawa County Commissioner Mark E. Coppeler (far left).

Gress served in the U.S. Navy from 1942-46 during World War II on the U.S.S. Jicarilla, and was delighted to receive a new baseball cap at his birthday party commemorating his old ship, an Abenaki-class tugboat named for an Apache tribe in the southwestern United State.

He returned home to work the family farm, and the coal mines of Ohio. The miner’s pay of $12 per day pushed him to switch careers, becoming a railroad man and ultimately moved up from brakeman to conductor before retiring in 1985.

Gress is a lunchtime regular at the Port Clinton Senior Center, and enjoys hearty meals at Chefsbest in Port Clinton a few times a week. His skills at dominoes and euchre have not diminished a bit, say his friends.