Century cottonwood transformed into Marblehead Lighthouse in time for 200th 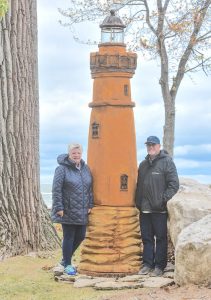 Mary and Rob Holley stand next to their lighthouse, a dying cottonwood tree that had been carved in their Catawba yard to honor the 200th anniversary of the Marblehead Lighthouse. The Holleys moved into their newly-built Lake Erie shoreline home in late October.

When Rob and Mary Holley decided to build a home on the Catawba shore of Lake Erie, there was a dying cottonwood with a precarious branch hanging over the homesite. They didn’t want to cut the tree down, which was estimated to be more than 100 years old, but an arborist they consulted said all of the branches were dead.

“It was a huge cottonwood. It had been hit by lightning or wind or whatever, and half the canopy was gone,” Rob said. “We decided to take it down, but as we began, we noticed it was very solid at the bottom.”

Instead of removing the base of the tree, they opted to turn it into a work of art.

The couple hired Kurt Hoffman of Carve Ohio to transform the nearly 12-foot stump into a smaller version of the Marblehead Lighthouse.

“My first thought was a totem pole, but that didn’t really fit in here at the lake,” Rob said.

Mary said they were eating at 1812 Food & Spirits when the idea for the lighthouse came to them. Not only is the theme fitting for the lakeshore house, but the timing was perfect because this year marks the 200th anniversary of the Marblehead Lighthouse.

It was the first time Hoffman carved a lighthouse, and he made six weekend trips between June and October to complete the project, which created unique challenges for him.

“I usually carve wildlife, but with a lighthouse, everything is straight,” Hoffman said. “It was sort of like building a lighthouse. If everything wasn’t straight, it would look cartoony.”

The Holleys weren’t worried about Hoffman’s ability to transform their tree into the Marblehead Lighthouse. They gave him complete creative control.

“I told him, ‘I don’t want to influence your artistic creativity. I see a tree. You see a lighthouse,’” Rob said.

Hoffman placed a glass globe and solar light at the top of the lighthouse and originally suggested a rotating light but, “I didn’t want the Coast Guard coming in,” Rob joked.

Now that the project is completed, the Holleys have a work of art right outside their new front door. Rob calls it “amazing.”

“We’re real tree lovers, and taking it down just about killed us,” Mary said. “But now we’re very proud of it.”