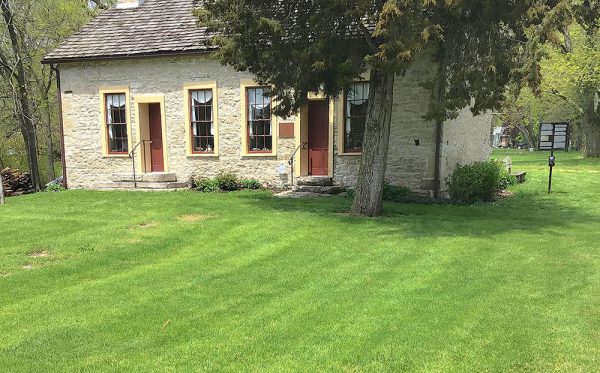 The members of the Ottawa County Historical Society (OCHS) took time out recently to remember Ro Chapman (1934-2018) and Jeanne Huskey (1940-2018) for their lifelong contributions to community, but especially for their work during the formative years in establishing the historic Keeper’s House.

In 1989, when the historical society purchased the small stone house on the Danbury Peninsula, it was little known for its historic significance as the oldest standing house in Ottawa County and home of its first settlers, Benajah and Rachel Wolcott.

Since then, the Keeper’s House has evolved into a historic landmark in Danbury Township and a valuable community resource.

“It was largely through the reenactments of the lives of Benajah and Rachel Wolcott, performed by Ro Chapman and Karin Messner, and the coordinating of events by Jeanne Huskey, that the Keeper’s House was successfully put on the local map,” said Bill Coder, Site Coordinator for the historical society.

Dick Taylor, past OCHS president, recalls that in those early years the importance of a $1,000 Ohio Arts Council grant to develop scripts based on The Firelands Journals. Sally Williams was instrumental in getting the grant, and Karin Messner wrote the scripts.

Besides Benajah and Rachel Wolcott, the reenactments provided fond memories for others in the cast – Jacque Chapman, Kathy and Warren Leonard, Kaitlyn and Zach Riedmeier, Bill Coder, Neil Merckens, Paul Moon and many others over the years.

“Ro was absolutely essential to the restoration project. At a critical time he took over chair of the Keeper’s House Steering Committee,” said Moon, a direct descendent of Benajah and recent OCHS past president. “People came to the Keeper’s House in the early days to see the theatrical productions. Only later did they come to see the House.”

The performances took place on the second Saturday of the month throughout the summer for 10 years, until 2001. Ro and Karin continued on for many years, welcoming guests at the Keeper’s House while portraying Benajah and Rachel Wolcott.

“Like Benajah,” Karin writes of Ro Chapman, “He was a good man. He and his warm personality and many talents brought a great deal of joy to this peninsula.”