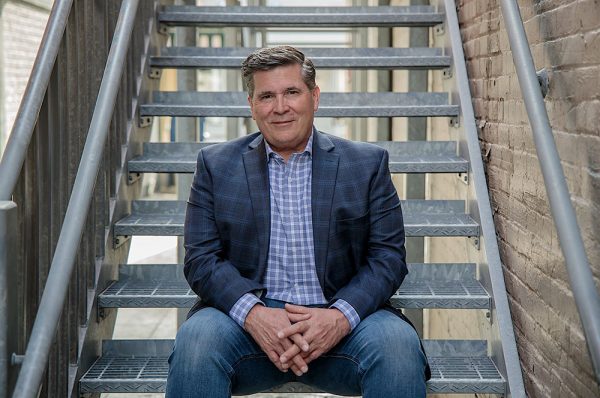 Daniel J. Rogers, former head of the successful Cherry Street Mission in Toledo, has been named the new President & CEO of Lakeside Chautauqua.

The Lakeside Association Board of Directors has announced the appointment of Daniel J. Rogers as Lakeside Chautauqua’s new President & CEO. Acclaimed as a skilled senior leader with a broad background in leading complex non-profit organizations, Rogers will be welcomed to Lakeside at a “Meet the President” event on Saturday, Aug. 15 at 1 p.m. at the Steele Memorial Bandstand.
Masks are required. Please practice safe social distancing.
Rogers has the skill set to provide programming and assistance to poor, underprivileged and homeless populations, combining an extensive business experience with a genuine love and curiosity of people. He humbly describes himself as a servant leader, intent on nurturing relationships within the community while working with and developing his staff.
Rogers most recently served as President & CEO of Cherry Street Mission Ministries of Toledo from 2005-2019, where he developed the strategic direction of the organization, fostered community partnerships and led significant fundraising efforts.
Cherry Street provides more than food, clothing and shelter for the poor, underprivileged and homeless. It is a ministry built around one-on-one mentorship and focused on who a person is, rather than what a person has become.
His vision led to the development of Cherry Street’s Life Revitalization Center, a $13 million facility housed in a former Toledo vocational high school. Programs are aimed at the reversal of poverty and bringing an end to homelessness in Northwest Ohio and Southeast Michigan.
During his tenure, Cherry Street grew into an $8 million non-profit organization that increased its ministry presence from three buildings to 17 and was recognized nationally as a successful model for innovative community partnerships.
In 2019, Rogers left his position to pursue the founding of Straightline Solutions, an organization that assists communities and non-profits in the cultivation of robust cultures through coaching, consulting and developing people.
Prior to his leadership at Cherry Street and Straightline Solutions, Rogers served as founder and lead pastor of an independent Christian Church and started his career as a teacher. He earned his Bachelor’s in Theology, Psychology and Behavioral Science from Mount Vernon Nazarene College.
Rogers is an author, TEDx presenter and the recipient of the Jefferson Award for Public Service. He received the Lifetime Achievement Award from Toledo area’s Entrepreneurial and Business Excellence Hall of Fame and was presented the Courage Award for Ohio from Governor John Kasich.
He is an authentic, warm person who is dedicated to leading and developing staff and the Lakeside community. To underscore his commitment to the community, Rogers plans to reside in Lakeside. He brings the depth of experience, understanding of human nature and superb leadership qualities that Lakeside desires to lead us into our 150th year and beyond.
“What an honor to be selected as Lakeside Chautauqua’s next President & CEO,” says Rogers. “The rich tradition of Lakeside, along with the dynamics of the four pillars, provides a depth of opportunity seldom seen in a lifetime. I’m thrilled beyond words to work alongside Dan Dudley, the team of Lakeside and the Board of Directors to imagine, together, a vibrant and sustained future for generations to come.”
“I am excited to work with a leader of the caliber of Dan Rogers to shape the future of Lakeside,” said Dudley, Lakeside Chautauqua Acting President & CFO/COO. “He brings great skills to the management team and staff that truly complement the existing team. I speak for the entire staff when I say that we look forward to helping Dan create a renewed vision for Lakeside and the community over the coming years.”