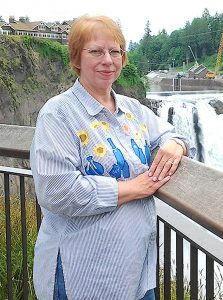 Cheryl Ann Burke, 69, of Port Clinton, passed away Saturday, Aug. 31, surrounded by her family at Stein Hospice Care Center in Sandusky, Ohio. She was born Oct. 8, 1949 in Toledo, Ohio, the daughter of Gerald E. and Esther R. (Wiggins) Wolford.

A devout christian, she was always active in her church. She played the organ, enjoyed gardening, bargain hunting, family card games and collected knick knacks. Ever lucky, she easily spotted many four leaf clovers. Cheryl was a skilled practical joker, and always surprised her family on April Fools’ Day, even though they were expecting it. She loved animals and made regular visits to the Humane Society of Ottawa County.

Carl R. Hill and his wife Jan of Rapid City, S.D., and many nieces and nephews.
A Celebration of Cheryl’s life was held Friday, Sept. 6, at Chapel on the Lake, 145 Bridge Rd, Lakeside Marblehead. In lieu of flowers, donations may be sent to Chapel on the Lake or the Humane Society of Ottawa County.