Chief Rob Hickman making switch to his other passions in life 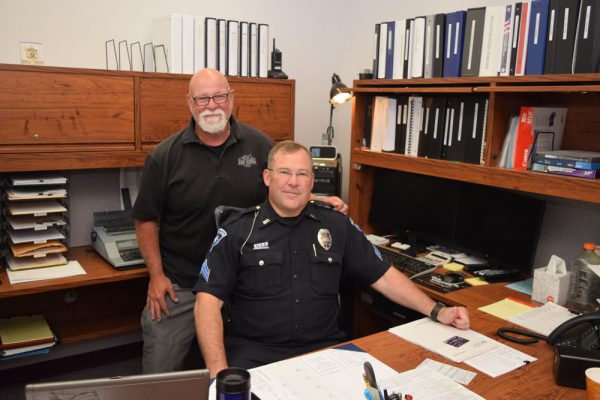 Port Clinton Police Chief Rob Hickman, left, is ready to turn over the law enforcement reins to long-time Sgt. David Scott on Monday, June 28, a date that has been written in stone for almost a decade. (Photo by D’Arcy Patrick Egan)

Chief Rob Hickman knew back in 2012 he was going to retire from the Port Clinton Police Department on June 28, 2021, and his new game plan was already in place after three decades.

Hickman’s passions are his wife, Roseann, a Port Clinton Councilwoman, a family that includes a batch of kids and eight grandchildren. He wants to travel, and take the family along, and now has a recreational camper to go with his motorcycle.

Some law enforcement work will continue, as well. Now Hickman will return to his first duties in law enforcement, as an expert in developing four-legged K9 officers. The Vice President of the North American Police Work Dog Association for two decades, he will become its president in November.

“I really didn’t want to be chief of the Port Clinton Police Department in the first place, but I was the only one who passed the test,” said Hickman, with a laugh. “Rather than have an outsider in charge, I accepted the job.

“I have always felt that it was boots on the ground, though, that defined a police force, and I’ve had the pleasure of officers who have been great to work with over the years,” said Hickman.

Hickman is a life-long Port Clinton resident and a 1980 grad of Port Clinton High School. Roseann is a member of the Class of 1982.

“We’ll planning to build a home out in the country this fall, wanting to be closer to our grandkids in Oak Harbor,” said Hickman. “We love going to their sporting events, and having them travel with us.

“This fall, I’ll head to Pennsylvania to begin helping other police departments both train police dogs and police dog handlers,” said Hickman. “I won’t wear a uniform ever again, but I’ll still help out in Port Clinton with things such as firearms instruction,” he said. “Port Clinton has always been my home, and I’ve always been proud to live and work here all of my life.

“And because of the department as a whole, not me, you can walk down the street at 3 a.m. and still feel safe.”

Sgt. Dave Scott is the new police chief, a 17-year veteran taking over a 25-man police force with six civilian dispatchers and two police patrol boats in the port town. Surprisingly, it is a police force that doesn’t grow in summer, when the tourists arrive and Port Clinton goes from 6,200 residents to hosting an amazing 1.5 million coming through the tourist area during the Memorial Day holiday.

“The overtime gets pretty crazy in summer, and the 12 hour shifts and seven-day weeks can be stressful for the officers,” said Hickman. “I’ve worked with Scott his entire career, and am confident he’ll make a terrific chief.”