The Catawba Island Historical Society will conduct a drawing in early July to win an 8-person brunch at the Catawba Island Club, followed by a lake cruise on the CIC’s luxury yacht, Gemini. The brunch and cruise will take place later in the summer or in early fall. Everyone with a lifetime membership, renewed membership from 2018, or new 2019 membership as of the drawing date will automatically be entered.

The prize is courtesy of the Catawba Island Club and an anonymous donor.  It is being offered to attract continued growth of the Historical Society’s membership roster which, after only one full year of operation, already exceeds 200 individuals, businesses and organizations.

“We thought it would be appropriate and fun to use the Gemini for an event,” said Craig Koerpel, President of the Historical Society, “because it has its own noteworthy and romantic past. Its predecessor, also named Gemini, was purchased by the CIC’s Stouffer family from British royalty, the Duke and Duchess of Windsor.”

The former King of England, Edward VIII, was the only person to ever hold the Duke of Windsor title. It was created for him when he abdicated his throne to wed twice-divorced American socialite Wallis Simpson.  Simpson became the Duchess of Windsor upon marriage and her impassioned relationship with the Duke was dubbed by many to be the “romance of the century.”

The original Gemini commissioned by the Duke and Duchess was a 57-foot Elco yacht. Vernon Stouffer, grandfather of Jim Stouffer, Jr., purchased it from them near the end of World War II and brought it to the Great Lakes. The Stouffer’s sold it in 1974.  It is believed to still be in service off the coast of Massachusetts.

A 73-foot motor yacht built by the renowned Berger Boat Company was purchased by the Catawba Island Club in the late 1970s to give renewed life to the Gemini name and its regal past. Today it is a unique local venue for celebrations, corporate functions, and special occasions like the Historical Society’s membership drive.

“The Catawba Island Historical Society very much appreciates this opportunity to offer a CIC brunch and a Gemini cruise as an incentive to build our membership,” said Koerpel.  “We will be providing more details about both in the near future.”

More information about joining the Catawba Island Historical Society is available at www.catawbaislandhistoricalsociety.com. 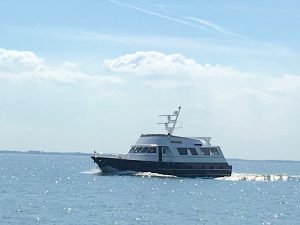