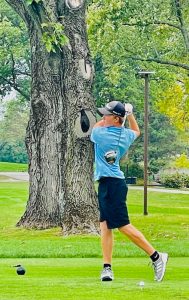 Grayson Clark had already secured his place as being one of, if not the greatest golfers in Danbury history. His recent performance at the Division III state tournament only added to his list of accolades.

The senior is the only golfer in school history to qualify for the state tournament, and recently tied for 19th out of 72 golfers. He shot a +21 on 36 holes, carding a 75 followed by an 88 for a total of 163 strokes at The Ohio State University Scarlet Course.

“Clark always had the physical skills,” said Danbury coach Dan Humphrey. “He’s long off the tee — probably the longest kid there — but what he was missing was that mental edge. He had to not get ahead of himself when having a good hole, and not get down on yourself when you’re having a bad hole.

“We had a team shirt and it had the state of Ohio on the back nine, so it was definitely a goal of ours. We had several goals in mind, but the ultimate goal was to get to Columbus.”

“At times you lose your swing. You’re never going to have it all, and it’s rare when you do,” said Humphrey. “You have to rely on his really great short game, and he’s got a short putter. That was as close to a perfect round as he’s had at districts.”

Clark talked about his performance at districts.

“It was unreal. When I first entered the clubhouse after the round at districts, just to see my name near the top of the leaderboard was an overall shock, but pure joy,” Clark said. “A relief in a way, it was a goal I had all throughout high school.”

Clark credits his parents with exposing him to golf at a young age.

“My parents both enjoy the sport, so they would take me and my brother out to play. Once we first went out, we never looked back. We didn’t stop playing. I think it started when I was four or five,” Clark says. “It’s been an amazing experience. I’ve always loved the sport. I didn’t get serious until seventh or eighth grade when I started competing in tournaments.

“My brother, Gavin, he’s a sophomore, and he made it to districts as well. He’s always pushed me, he’s a fierce competitor. It’s always been fun to have someone to play with. If I’m going to play golf and I ask him if he wants to come along, he’ll say, sure.

He loves it just as much as I do. I look forward to what he can do in the next few years.”

“He’s been such a big reason for my success,” Clark said. “He’s helped me when I’ve been down. I’m so thankful for all he’s done for me with my high school experience.”

At this point, Clark is considering playing golf in college.

Clark carries a 3.9 GPA, and is a member of the National Honor Society.

“He’s a wonderful kid to be around,” said Humphrey. “He’s a gentleman and has good manners. That’s kind of rare.”