Closed roads a trial by stoplight for Danbury Township

Road closures to construct a roundabout designed to alleviate traffic jams at the intersection of State Route 163, North Shore Boulevard and Englebeck Road in Danbury Township have resulted in lines of vehicles and frustrated drivers. (Photos by D’Arcy Patrick Egan)

As the summer tourism season winds down on the Marblehead Peninsula, construction of a roundabout by the Ohio Department of Transportation (ODOT) will slow visitors and residents on the busy roadway.

Portable traffic lights have been put in place on State Route 163 in Danbury Township to limit traffic to one lane for a short stretch and side roads North Shore Boulevard and Englebeck Road are closed at the roundabout construction site.

The roundabout is designed to smooth traffic flow during the busy summer tourism season, and cut down on vehicle accidents.

The future benefits of the Danbury Twp. roundabout won’t be known until the middle of November, when the Ohio Department of Transportation finishes its work. But being stuck in line this week to wait for a green light under the hot late summer sun when the walleye are biting has been especially frustrating. 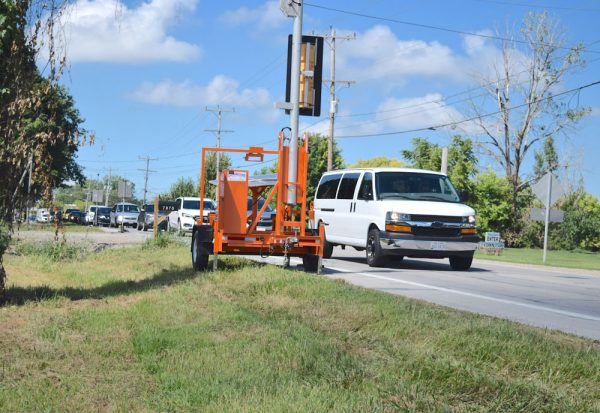 Just about the only way to reach the popular Mazurik Boat Access on Marblehead or the popular Lakeside Chautauqua and Marblehead communities through the middle of November will be via the roundabout.

There are ways to detour around the traffic jam on the Marblehead Peninsula, but few are fast or easy. Ancillary side roads have also had to be closed because drivers put their foot on the gas after a long time in line, a bad idea on roads with a 25 mile per hour speed limit.

The intersection targeted for the roundabout has Englebeck Road closed at SR 163.

Access to the Mutach’s and Dollar General businesses at the roundabout intersection will be maintained throughout construction. All updates provided by ODOT will be posted on the Danbury Township website, danburytownship.com, and weekly in The Beacon newspaper and here on this website.

Road closures have made for long lines of traffic and driving difficult in recent days on the Marblehead Peninsula.

ODOT waited until the summer tourism season was almost over to begin construction of the $2 million roundabout. Many local residents would have instead preferred a street light at the intersection, but ODOT has favored roundabouts around Ohio to help the flow of traffic on busy roadways.

To alleviate confusion when the roundabout is finished, eight LED street lights will be installed to guide drivers safely around the roundabout after dark.

ODOT could be even more ambitious with pair of roundabouts at the nearby Route 2 highway and State Route 53 in Port Clinton, the main drag on the west side of the city. They will turn State Route 53 into a three-lane highway with a center turn lane between Route 2 and SR 163, a busy commercial area that is the heavily-travelled gateway to Port Clinton and Catawba Island.

There will be a roundabout at the busy SR 2 exit to SR 53, and another roundabout a short distance away at SR 53 and State Road.

The much-sought project will cost $10 million, a cost already approved by the Ohio Legislature. Plans are still in the works. ODOT is not expect to start construction until late in 2023, and it will last through 2024.

Why has ODOT been convinced roundabouts are best?

The most common justification for a roundabout is safety. This is because roundabouts only have eight potential conflict points vs. 32 at a traditional intersection. Studies by the Federal Highway Administration (FHWA) show that roundabouts achieve a 44% reduction in crashes and reduce serious injury and deadly crashes by nearly 90% at two-way stop intersections. When roundabouts replace a traffic signal, FHWA found a 48% reduction in crashes and nearly 80% drop in serious injury and deadly crashes.