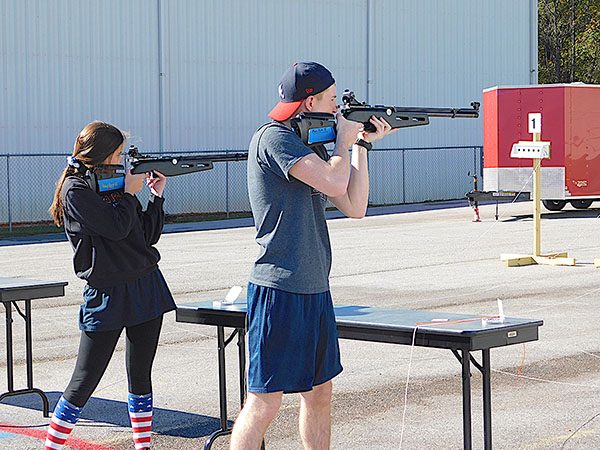 The Target Sprint matches feature both target shooting with shorter air rifles and running from target to target. The match will be fire on Tuesday, July 16.

The Civilian Marksmanship Program (CMP) is adding a new “run and gun” event to its 2019 National Matches lineup at Camp Perry on Tuesday, July 16 that is guaranteed to challenge marksmanship skills, physical fitness and endurance while also stirring up undeniable fun for competitors of all ages.

The Target Sprint event features a mix of air rifle firing and short bursts of running, with competitors aiming to achieve the best possible time in a race against the clock. Participants begin with a 400-meter run before taking their places on the firing line. Competitors then use sporter air rifles to fire from 10 meters at five 35mm knock-down targets from the standing position, with a maximum of 15 shots given.

The alternating course of rounds of running and shooting consist of: run, shoot, run, shoot, run and finish. Competitors will receive five minutes of preparation and sighting time before each heat.

The best possible time wins, so shooters must be swift and accurate! Additional time of 15 seconds will be added for every shot missed by those competitors who exceed the 15-shot allowance per shot series.

Two classes of competitors will be recognized: Juniors (9-18) and Open (15 and up). Crosman Challenger air rifles will be provided during the event, though personal 10-meter rifles compliant with USA Shooting rules are allowed. Pellets will not be provided but may be purchased at the Gary Anderson CMP Competition Center, if needed.

For registration and more information, please visit the CMP website at http://thecmp.org/competitions/cmp-national-matches/target-sprint/. Be a part of this inaugural event!