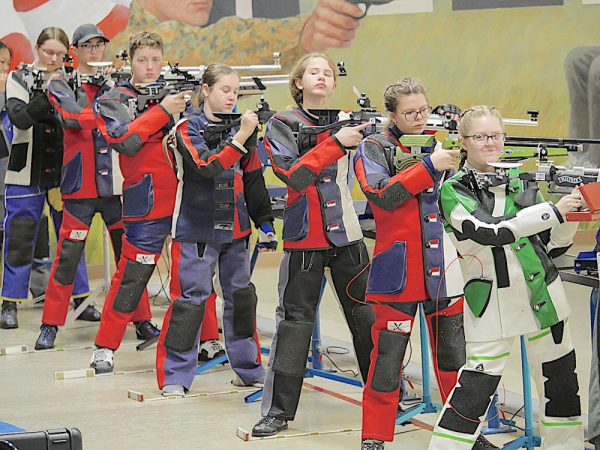 The Gary Anderson Invitational is a three-position air rifle competition for junior athletes.

CAMP PERRY – Registration is now open for the Civilian Marksmanship Program’s (CMP) junior air rifle event, the Gary Anderson Invitational. The annual match is set to be held on Saturday, Dec. 3 at Camp Perry in Port Clinton and Friday and Saturday, Dec. 2-3 at the Judith Legerski CMP Competition Center in Alabama.

The Gary Anderson Invitational is designed for junior schools, clubs and individuals of all experience levels, using sporter and precision rifles in a 3×20 course of fire – 20 shots at prone, standing and kneeling positions. Along with sporter and precision athletes, adaptive junior competitors are welcome to compete in this event. Winners are determined overall from 3×20 qualifying scores, plus 10-shot finals held at both Camp Perry and Anniston.

For more information about the Gary Anderson Invitational, including a link to registration, visit https://thecmp.org/cmp-matches/gary-anderson-invitational-air-rifle-championship/.

In 1999, Anderson began a 10-year reign as Director of Civilian Marksmanship and retired in December 2009. Today, he serves as DCM Emeritus and remains a mentor for new and experienced marksmen around the country.

Display cases around the facility contain authentic memorabilia from the career of Gary Anderson, leading to an 80-point air gun range that replicates the range in Anniston. Be sure to check out the larger-than-life mural located within the range that can only be found at Camp Perry.

The 20,000-square-foot CMP South Competition Center in Anniston, Alas., is home to an 80-point air gun range equipped with CMP’s own electronic targets, powered by Kongsberg Target Systems. The target line instantly displays shot placements to allow for fast and accurate scoring, while large monitors overhead give spectators the chance to keep up with scores while observing from the stands. Recently, the South Competition Center was renamed as the Judith Legerski CMP Competition Center after Legerski retired as Chairman of the CMP Board of Directors, serving over 26 years.

Learn more about the CMP’s air gun ranges at https://thecmp.org/ranges/cmp-competition-centers/.

Restricted 18+ in CA in compliance with CA State Assembly Bill 2571 prohibiting the marketing of firearms to minors in the State of CA.