It has been a very rough month for many of the federal employees who work and live around Ottawa County, but especially for members of the U.S. Coast Guard. While most members of the U.S. military received paychecks, despite a 35-day federal shutdown, Coast Guard workers were required to be on the job despite not being paid.

The inequity, said Molly Rosiar of Jamestown Tavern in Marblehead, where the Coast Guard is based, brought out a lot of local financial support. Joining businesses like Starcher Enterprises in Marblehead, Bistro 163 in Port Clinton and Ottawa County social services groups, local residents purchased gift cards, made cash donations and created a food bank for the beleaguered employees.

Chief Warrant Officers Bethannie Kittrell and Patrick Howerton of the Marblehead Station stopped at Bistro 163 on Monday to give their thanks for the community support. With the federal shutdown now over, at least for the next couple of weeks, the two officers were also smiling after receiving their first paychecks in more than a month.

“The shutdown was hardest on young families,” said Kittrell. “Groceries, gasoline and everyday expenses were difficult. The community has been so kind and generous. It was very humbling for all of us, and the donations really helped during a time of need.”

Kittrell said they were fortunate to be stationed in Marblehead, where the Coast Guard is an integral part of the community. Many officers live in the Marblehead area, and appreciate the friendliness of friends and neighbors in the community.

There is also one last fundraiser scheduled, said Molly Rosiar of Jamestown Tavern.

“We had planned a Happy Hour Fundraiser on Friday (Feb. 1) from 7-10 p.m. at Jamestown Tavern,” said Rosiar. “We decided to go ahead with it, making it a benefit for the Chief Warrant Officers’ Association/Great Lakes Chapter,” which helps Coast Guard members in need.

There is a $5 cover on Friday, Ronnie Roadhouse will be on the Jamestown Soundstage and partiers are asked to bring donations of gift cards, non-perishable food items and personal hygiene products. Food will be distributed to local food banks. 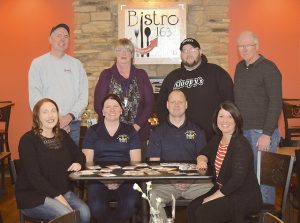 The local community quickly organized a special fundraiser to help federal employees around the area receive much-needed benefits during the 35-day shutdown of the federal government, which ended on Friday. Celebrating the effectiveness of the fundraising campaign were (seated, left to right) Molly Rosiar of Jamestown Tavern, and Chief Warrant Officers Bethannie Kittrell and Patrick Howerton of the Marblehead Coast Guard Station. Standing are (left to right) John Starcher of Starcher Enterprises, Sandy Fandrich of Community Support Services, Brad Corbin of Sloopy’s Sports Cafe of Marblehead and Greg Peiffer of WCPR Radio. (Photo by D’Arcy Egan)