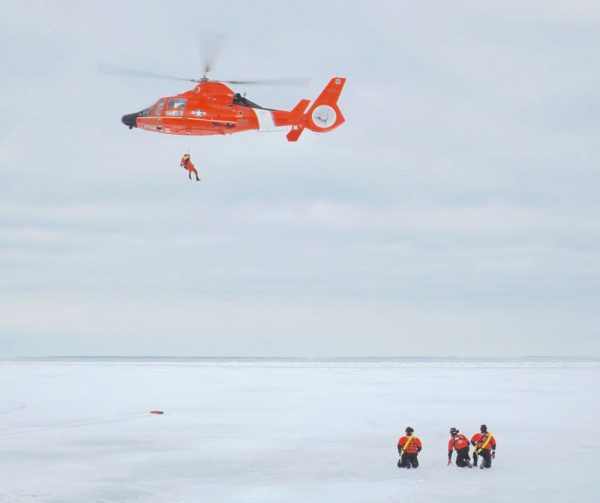 It is the middle of winter in Ohio. Snowmobiles and all-terrain vehicles could be seen and heard as they zoomed across the ice of Lake Erie. Tent cities had begun to sprout up, the Lake Erie ice fishing was luring crowds of anglers, and past history was ample proof accidents could happen.

The United States Coast Guard crews at the Marblehead Station have to be ready in winter for mishaps on the ice. To make sure the crews and equipment are always ready, each year the hardy officers head out on the Lake Erie ice to conduct ice rescue training.

“Snowmobiles and ATVs, they are always falling in,” said Morse. It is the Coast Guard’s frigid task to rescue them.

At a recent training session off the Marblehead Peninsula, the crews practiced making a difficult air rescue with the cooperation of a Coast Guard helicopter from the Detroit Air Station, which made the half hour flight to the Ohio shoreline. A member of the Coast Guard ice rescue group was lowered down to the ice by a tether, and the officer simulated lifting a body off the ice and up to the rescue helicopter. 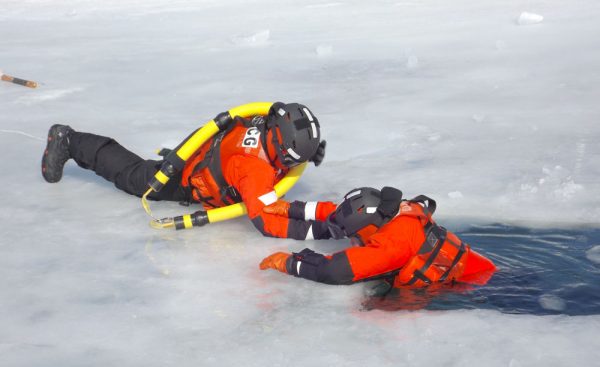 Seaman James Beckman pulls Chief Warrant Officer Bryce Adams from a hole in the ice on the frigid waters of Lake Erie in a simulated rescue.

Another exercise involved saving a person who’d fallen through the ice. For this training exercise, Chief Warrant Officer Bryce Adams lowered himself into a large rectangular hole cut in the ice. Seaman James Beckman was the rescue man.

The questions were designed to elicit needed information about the person’s condition and to calm the victim.

“Victims who fall through the ice go through three different stages, or the ‘1-10-1 rule,’” said Petty Officer Morse. “When you fall through the ice you have one minute to actually catch your breath and focus, usually followed by 10 minutes of functioning movement, and then one hour of consciousness.”

Over the years, much has changed in ice rescue techniques, said Assistant Chief John Domer of the Put-in-Bay Volunteer Fire Department, whose personnel had joined the Coast Guard for the practice session. “The science (of rescue) has changed. It used to be you would go out there with a ladder and some rope,“ said Domer. “Now, we have highly specialized equipment designed for ice rescue.”

The Coast Guard helicopter based at the Detroit Air station can reach Marblehead in approximately 35 or 40 minutes. The Coast Guard Marblehead Station has two large, swift air boats that can quickly cover miles of ice and rescue stranded anglers and people whose recreational vehicles have gone through the ice.

Anglers often become stranded on the ice when the ice pack they are on separates from the main floe and creates open water that is impossible for fishermen to cross. The bottom of the air boats are coated with silicon, preventing the boats from freezing to the ice when stopped. 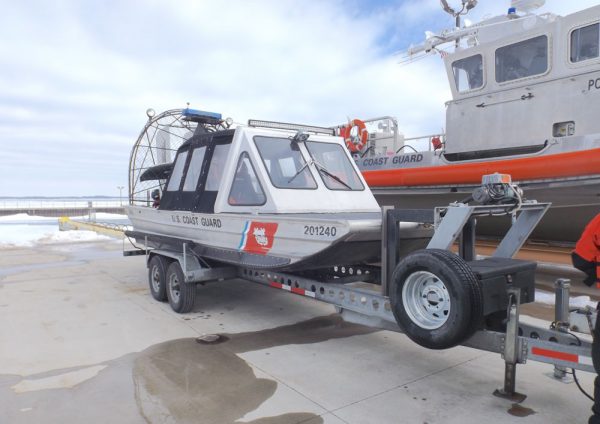 An airboat that can swiftly travel on the Lake Erie ice or in open water is a valuable craft for rescuing ice fishermen in winter.

In addition, the Coast Guard rescuers can use a MARSAS ice rescue sled, which is like a small surf board, to speed up a rescue response by winching a victim quickly to shore.

Gearing up for an ice rescue today is akin to getting ready for a walk on the moon. Dry suits allow rescuers to handle a lengthy immersion in the frigid waters, and special boots have spikes on the soles, allowing a person to easily walk on the ice.

CWO Adams talked about the outfits worn by the rescue specialists who were on the ice.

“There are special socks that wick moisture away from the body. We have a layer like a ‘bunny suit,’ a thermal layer, and on top of that is our dry suit that is completely waterproof.

“The modern suits are made of neoprene that seals out the water. We wear a hood and special cold weather dive gloves. And helmets and goggles for safety purposes. In addition, we wear a life vest with the various tools we might need attached to it.”

Every day, members of the Coast Guard know that they may have to put their lives at risk to save someone else, but willingly perform the task. “Thank you” to the men and women who serve. 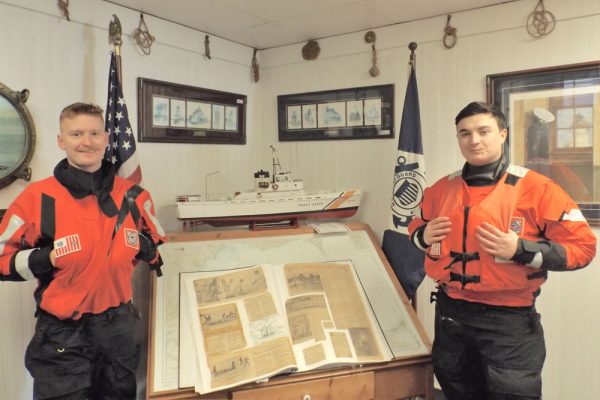