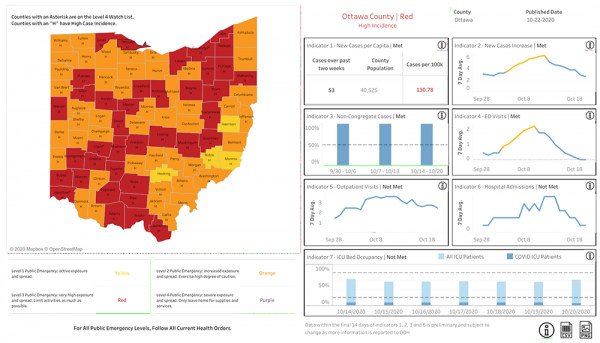 For the first time since the COVID-19 pandemic began in Ohio, Ottawa County was elevated to a Red Level 3 Advisory on Oct. 22 for “very high exposure and spread” of COVID-19. While it is difficult to identify any one reason for the significant increase in cases, the Ottawa County Health Department reported four of five indicators triggered the county’s rise from Orange Level 2 to Red Level 3.

The colors, which range from Yellow Level 1 to the dreaded Purple Level 4, which has yet to be registered, the Red Level 3 status triggers and advisory for Ottawa County officials to recommend restrictions for at least the next two weeks. The Ohio Department of Health issues the advisories every Thursday.

A record number of COVID-19 cases have hit Ohio for four days in a row, reaching 2,858 cases on Saturday, with eight record high counts in October and a record number of hospitalized. Speculation has run rampant, blaming the surge on groups at bars, restaurants, funerals and football games. And even force-air heating systems, which have kicked into gear as the fall weather arrived, have been blamed for spreading the virus.

“We have not had any big outbreaks anywhere in Ottawa County,” said Health Commissioner Jerry Bingham of the Ottawa County Health Department. “I don’t believe we’re seeing it in the schools, where less than 10% of the kids have tested positive.

“We did see an outbreak about a month ago here, which happened in an office environment. But we know people can get careless if they go out to eat in a group, or attend a social gathering.”

While Ottawa County and other rural counties had seemed to escape the surge in the virus that have plagued more populated Ohio counties, that’s not the case right now. Any county approaching 100 cases per 100,000 residents is classified as a “high incidence level” by the U.S. Centers for Disease and Control on Prevention.

Ohio COVID-19 cases have doubled over the last two weeks. Thirty-eight of Ohio’s 88 counties are now red, about 74% of the state’s population. Ottawa County turned red for the first time, as did Allen, Crawford, Geauga, Hardin, Lake, Lorain, Tuscarawas and Wayne. Hamilton, Clark and Cuyahoga are perilously close to being the first “purple” counties.

Some changes people in Ottawa County will see for at least the next two weeks include the Ottawa County Commissioners requiring face coverings to enter county facilities, and temperatures may be required taken. County offices will operate by appointment only.

While the Ottawa County Riverview Healthcare Campus has yet to have a positive test for COVID-19 on its campus, it will cancel visitations for now. Riverview Staff and Rehab Staff will be tested weekly.

“Wearing a face covering is the most important thing everyone can do right now,” said Bingham. “If 80% of the population wears a face mask, we can deter the virus from spreading. Do it out of respect and to protect other people.”

Gov. Mike DeWine said that no one knows when a vaccine will be coming to Ohio. “Wearing masks is the best shot Ohioans have at curbing the spread in the meantime,” he said.

Superintendent Guy Parmigian off the Benton-Carroll-Salem School District said no changes are expected in how the schools operate. He said the Ottawa County Health Department has provided assurance schools are not causing the spread.

“Of the current positive cases, less than 10% are school children, with 75% of the cases between the agers of 40 and 79,” said Parmigian. “B-C-S has had five positive cases.”