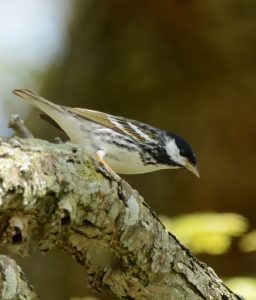 Flocks of warblers in an artist’s palette of dazzling colors are the stars of The Biggest Week in American Birding from May 6-10.

“They’re so colorful, and their migration through our area is so magical at this time of year,” said Matt Kovach, who grew up along the Lake Erie shoreline and evolved into an all-around outdoorsman.

When the southerly breezes pick up speed at this time of year, the warblers are waiting to ride the wind for a brief stay on the Lake Erie shoreline in Northwest Ohio.

“It’s very much the perfect migration situation for this region along the Lake Erie coast,” explained Kovach, a conservationist who recently switched from his post at The Nature Conservancy to join GEI Consultants.

“I’m still going to be doing the same work, being a restoration ecologist. I’ll still be working to restore wetlands habitat and coastlines and beaches while opening an office for GEI Consultants.

“GEI is an international company, and has a lot of Great Lakes offices. It’s going to allow me to expand my footprint around the Great Lakes.”

And enjoy the amazing bird migrations, and the fishing and hunting.

Warblers are a favorite, he said, because there always surprises.

“The little muffleheads and midges, which are little bugs, are coming up at this time of year, just in time for the warblers, which are insectivores. The warblers will feed heavily on them, packing on the calories they need for their annual migration.”

The warblers are also very friendly for birders, as well, said Kovach.

“The warblers come in so many different colors, and they prefer to congregate in high quality habitat found here. They love this region of Northwest Ohio, and Lake Erie concentrates them along the shoreline in foliage that is down low — perfect for birders on the ground wanting to see and photograph them.”

The bird migrations happen in big waves, said Kovach, just as in the fall when large flocks of waterfowl are migrating through the same areas.

“Southern winds from the lower United States — and even further away — push the birds up to us in big waves, and the players keep changing all of the time. The warblers come early and with much diversity. A big shore bird push arrived the other night.”

You just never know what you’ll have arrive in the dark of night, or how long they’ll stay. The darkness helps to protect the traveling songbirds from predators, such as hawks.

“Some keep moving overnight, and may only stay for a day,” said Kovach. “The southerly winds that give them a push might calm down, and we’ll see a big mish-mash of migrants around here for days.”

While many want to see regal bald eagles in their nests and in flight, the majestic birds have become quite common in Ohio over the last few decades. There were only only four nesting pairs of bald eagles in Ohio in 1979. Ottawa County, home to the Greatest Week in Birding, had 90 documented eagle nests last year.

“But while warblers aren’t rare, they do migrate in huge flocks. They’re seldom here for long, though,” said Kovach. “It’s a real pleasure to see and enjoy the colorful birds.

“A reason we’re famous for our warbler migration is that they can also be found in the Boreal forests of Canada, but not at the high concentrations as we often see during our migration. And while they’re fairly common in southern states like Georgia or Missouri, the leaves in those states are so much more developed during this time of their migration, it’s difficult for birders to get a glimpse off them.”