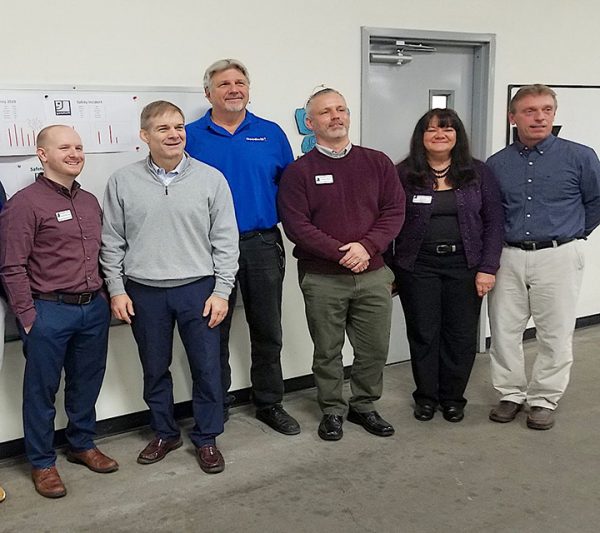 Ohio Congressman Jim Jordan visited Bellevue recently, and made a stop at Goodwill’s 116,000-square foot manufacturing and warehouse facility. Jordan saw a variety of production operations and asked questions about the manufacturing processes and customers.

“Congressman Jordan was genuinely interested in what Goodwill was doing and, like many residents, did not know Goodwill had such large manufacturing operations,” said Jason Stout, Goodwill’s Vice-President and CFO. “Most residents know our retail stores, some know our manufacturing, but with the congressman we wanted to highlight our mission of job training services for the disabled and disadvantaged and how that ties into our operations.”

During the Congressman’s tour Adam Morrison, Business Services Manager for Goodwill, presented an overview of Bellevue’s Goodwill Plant where 60 employees make more than 24,000 parts each day for local manufacturers. While touring the facility Jordan took the opportunity to talk with several plant employees and gather feedback.

Morrison also highlighted Goodwill’s mission and gave an overview of Goodwill’s social and economic impact on the local community.

“Goodwills can be found across the nation but are operated independently by a local CEO and Board of Directors who are responsible for the daily operations.” he said. “Goodwill Industries of Erie, Huron, Ottawa and Sandusky counties provided job training services to more than 17,000 residents in those four counties last year alone.”