Cooperation is critical as Lakefront Preserve blossoms in Port Clinton 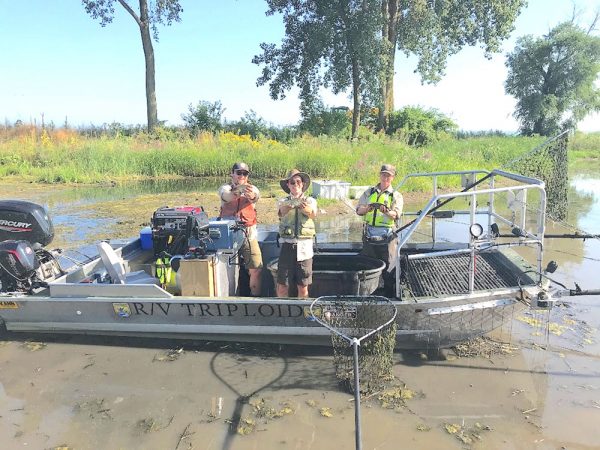 A U.S. Fish and Wildlife Service electroshocking boat was invaluable in removing carp from the Lakefront Preserve in Port Clinton. 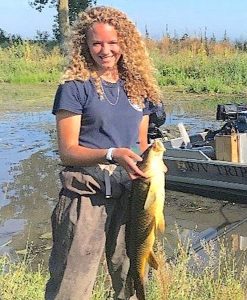 Phoebe Jackson, an Ottawa National Wildlife Refuge college intern, shows off a carp removed from the Lakefront Preserve in Port Clinton by an electrofishing crew.

The Ottawa National Wildlife Refuge has been collaborating with the City of Port Clinton, Army Corps of Engineers, Ohio EPA, and the Black Swamp Conservancy to restore and enhance coastal wetlands at the Lakefront Preserve in Port Clinton.

That spirit of cooperation was tested by a fierce nor’easter that flooded the area where The Lakefront Preserve is being created as a 14.25-acre coastal wetland and cottonwood dune community along Perry Street in Port Clinton, east of Waterworks Park.

The U.S. Fish and Wildlife Service and Port Clinton entered into a Cooperative Management Agreement in 2018 to support the long-term conservation management of the area. The agreement established the Lakefront Preserve Unit of Ottawa NWR and will allow the USFWS to provided technical resource management assistance to Port Clinton.

The flooding resulted in significant lake water overtopping Perry Street and inundating many of the side streets. It also brought large numbers of invasive carp into the wetland.  Common carp are highly detrimental to wetland function and ecosystem services provided by wetlands. 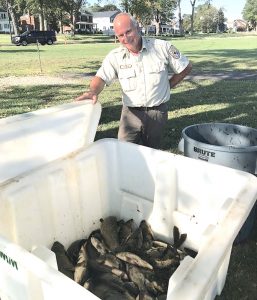 Containers of common carp were removed from the Lakefront Preserve after northeast winds and flooding in late May allowed the invasive fish to move in from Lake Erie.

In response to the invasive carp, Ottawa NWR was asked by Port Clinton officials to assist in the removal of the invasive carp. Carp removal would help support the final phase of the restoration that will see numerous native plants cultivated around the wetland.

In late August, Jim Boase and the Alpena Office–Detroit River Sub-station staff, Ottawa staff, and Port Clinton city employees implemented the carp removal efforts. It was a very labor intensive effort using both electrofishing boats and various netting methods. The shallow water conditions and boat access issues made the project even more challenging for the fisheries crews. A heat index of near 100 degrees was another major factor that increased the complexity and challenges for the project.

However, the project successfully removed more than 600 fish from the wetland, which was approximately 90% of the estimated carp population. A special thank you to the FWS Fisheries Office for all their efforts to support Great Lakes wetland restoration.