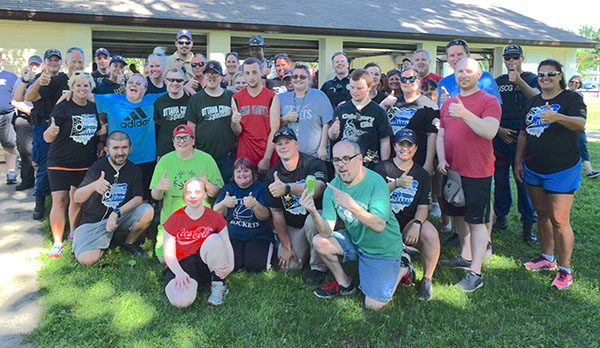 Maddox, 5, found a happy lap with Port Clinton Fire Chief Kent Johnson, enjoying the attention from the men and women of the Port Clinton Fire Department. Chief Johnson’s crews handled the Lakeview Park barbecue grills at the Law Enforcement Torch Run, feeding a crowd of runners and their supporters. 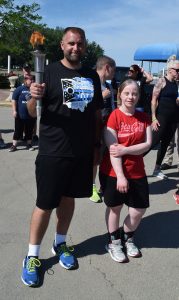 Sgt. Josh Nelson of the Port Clinton Police Department had the Flame of Hope Torch in hand and was ready to lead the Law Enforcement Torch Run from the Jefferson Street Pier to Lakeview Park on Sunday. (Photos by D’Arcy Egan)

The Law Enforcement Torch Run (LETR) for Special Olympics Ohio made its annual stop on the Portage River in Port Clinton on Sunday. While historically high water along the city shoreline required a few changes, it couldn’t dampen the spirits of the police, fire and military officers or the Special Olympics athletes.

The mission of the LETR is to raise awareness and funds for the Special Olympics movement. It began in Wichita, Kan., in 1981, and was soon embraced by the International Association of Chiefs of Police. There are more than 97,000 law enforcement members that carry the lighted “Flame of Hope” each year, which symbolizes courage and celebration of diversity, uniting communities around the globe.

On Sunday, the LETR caravan arrived at the Jefferson Street Pier after a boat ride from Put-in-Bay. The annual Portage River salute with fire hoses by local fire departments had to be put on hold because the parking lot was already filled with a rising Lake Erie and buffeted by northeast winds.

The young Special Olympics competitors didn’t mind a bit. Following a lineup of fire engines and police cars down Perry Street — with sirens wailing and lights flashing — they enjoying the noisy journey to Lakeview Park. That is where the hot dogs and hamburgers donated by Ottawa County Prosecutor James Van Eerten were waiting, along with an icy drink after a run on a hot afternoon.

The LETR will again be led by the official Flame of Hope on Friday, June 28, into Jesse Owens Memorial Stadium in Columbus. More than 2,500 Special Olympics athletes from all over Ohio will compete over the weekend in Ohio’s largest Special Olympic event. 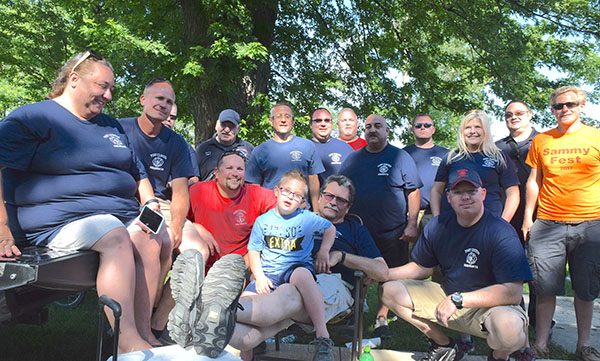 All of the local supporters and participants celebrated another chapter of the Law Enforcement Torch Run in Port Clinton on Sunday by gathering for a team photograph.