Cornell named the Player of the Week 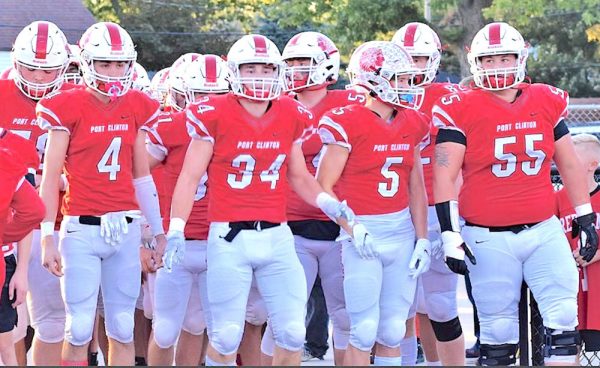 Garrett Cornell (34) led Port Clinton to a victory over Vermilion, 34-0, on Friday night with plenty of support from his teammates. The running back gained 139 yards on the ground in the ‘Skins’ sixth win of the season.

Port Clinton running back Garrett Cornell knows this is his last chance to help his team make a deep playoff run.

He’s a senior, and he’s battled injuries this year before returning recently. Cornell is primed to lead the Redskins on a run, and he could be hitting his stride as the team enters the stretch run.

“It’s great just winning with this group of guys,” said Cornell. “We put a lot of time into the offseason and we have a camaraderie that’s very close with our team.

“It was very demanding with everyone pushing each other to be better, and holding one another accountable.”

Last season, the ‘Skins played the eventual-state champion in Van Wert in the second round of the playoffs and lost, 46-20. Despite the loss, Port Clinton was able to put up a great fight against the Cougars, and Cornell knows his team can compete with the best Division IV has to offer.

The ‘Skins are currently ranked third in the Div. IV, Region 14 standings with 13.09 points.

One of the nice things for Cornell is that his cousin, Dustin, works on the coaching staff as an assistant.

“It’s great having him as a coach. I’ve looked up to him as a person for a long time because he has coached me in football and even in wrestling,” said Garrett Cornell. “He has always pushed me to better myself no matter the circumstances, but on the other hand, he doesn’t treat me any differently than the other players on the team.”