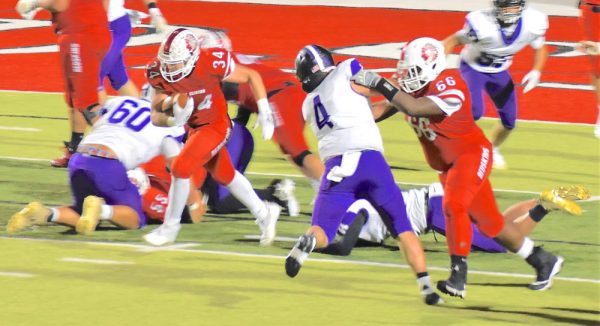 Running back Garrett Cornell (34) had his best game of the season last Friday in the Division IV, Region 14 playoffs against visiting LaGrange Keystone, rolling for four touchdowns, 221 yards and spearheading a 44-13 victory. (Photo by Kira Lucero)

PORT CLINTON — Port Clinton coach Beau Carmon knew his offensive line had a size advantage up front, and he intended to use that in his favor.

As a result, the Redskins (11-1) controlled the line of scrimmage and Garrett Cornell had his best game of the season. The senior ran for 221 yards and four touchdowns in Port Clinton’s 44-13 victory over LaGrange Keystone (9-2) in the second round of the Division IV, Region 14 playoffs.

On the second play from scrimmage, Redskin defensive back Owen Auxter intercepted a Konner Rodick pass, and three plays later, Port Clinton quarterback Cam Gillum found Anthony Aukerman for a 53-yard touchdown to take the lead for good at 6-0. Andrew Hanson kicked the first of six PATs to push the lead to seven points.

After forcing a punt, the ‘Skins, the No. 4 team in the region, went on a 14-play, 70-play drive, which ended with Hanson kicking a 31-yard field goal that hit the crossbar twice before just clearing it, giving Port Clinton a 10-0 lead.

The fifth-seeded Wildcats responded, driving 60 yards in just three plays with Rodick running for a 55-yard gain that was followed up by 5-yard touchdown run by Gideon Lampron.

But the ‘Skins extended the lead on a drive that saw them run on eight of 11 plays, which culminated with a 2-yard touchdown run by Cornell. The 17-7 held until halftime, and Port Clinton blew the game open with four touchdowns in the third quarter.

The next 12 minutes was vintage Cornell.

He carried the ball eight times on the first eight plays, scoring from the 4-yard-line with 9:03 left in the quarter and then added a 49-yard touchdown run about three minutes later to push the lead to 30-7.

“We thought we had an advantage (with the offensive line),” said Carmon. “Our offensive line is blocking well. Garrett is running the ball hard. He is a tremendous football player.”

In the third quarter, Cornell ran for three scores (4, 49, 8) and Josh Hurst caught a 20-yard touchdown pass from Gillum. Cornell had 218 rushing yards in the first three quarters, including 155 in the third quarter, as the offensive line began to take over the game.

“We have a big offensive line,” said Cornell. “Those holes were massive.”

The 11 wins are the most in school history, and it’s just the second time the ‘Skins have advanced to the regional semifinals.