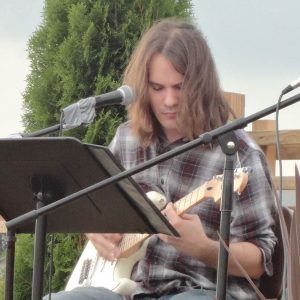 Since his college days at Bowling Green University, Cory Jolly has been a talented performer.

Cory Jolly graduated with a Bachelor’s degree in Jazz Studies from Bowling Green State University, and has played with many great local artists, as well as some featured musical stars visiting the Bowling Green campus.

On Friday at 5 p.m. Jolly will take over the M.O.M. outdoor stage on Port Clinton’s Madison Street at 5 p.m. He brings with him a dance card that ranges from rock to jazz, country, bluegrass and more.

A few of the venues that Jolly appeared at while in college include: The Detroit Jazz Festival in 2012 and 2014; The Jazz Education Network 2013 in Atlanta, Ga.; and The Black Swamp Arts Festival in 2012. After graduation from BGSU Jolly began playing in the local area of Bowling Green, Port Clinton and Findlay as a solo artist and in a Duo project titled “Northern Crossing.”

In 2015 Jolly moved to Athens, Ga. and began performing with many groups on vocals, guitar, mandolin, and backing vocals. Notably Jolly has performed with Tyler Sloan (American Idol) as his guitarist and background vocalist.

Jolly was featured on the radio show “Best of Unknown Athens,” which is a songwriters round similar to “Austin City Limits.” Jolly then landed a gig on the Disney Cruise Line performing in the Jazz Big Band as a guitarist and in a jazz combo in early 2017. In the Summer of 2018 Jolly moved back to Ohio and has been performing in many local area establishments such as the Rocky Point Winery, Catawba Island Brewing Company, The Gristmill, The Brick House and many others.