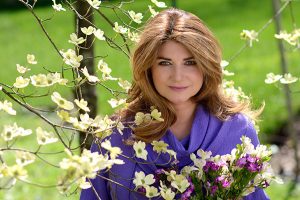 Sylvia Hutton made a name for herself as a solo country artist with RCA Records in the 1980s, releasing five albums that included a dozen No. 1 and Top Ten hits. While entertaining fans around the country, Sylvia was also searching for fulfillment, which was much harder to find than success as a singer.
“I came to a fork in the road back then,” said Sylvia, who like Cher goes by her first name. “I was not happy doing my music or appearing on stage. I made it my quest in the early 1990s to find myself, to work at something I love.

“I found that I love to work with people, to communicate with them, and became a certified life and career coach to help people dig down in their lives and make choices for what they want out of life.”
Sylvia became more grounded, more intimate with her music, and began performing at much smaller venues where she can relate to the audience. As a result, Sylvia will appear at The Listening Room at Our Guest Inn in Port Clinton on Friday, Aug. 23 at 8 p.m.

Her fans from the old days will find her singing different tunes, mostly her own, this time around.
“I’ll be singing songs from my latest album, All in the Family, a collection of uplifting, insightful songs gleaned from my own experiences, my own growth,” said Sylvia, by telephone from Nashville, Tenn. “I’ll also be singing some of my 1980s music that we re-recorded last year on the album ‘Second Bloom.’

The object was to keep the core energy of songs like Nobody, Tumbleweed and Drifter.

Those songs helped Sylvia become one of the most celebrated female country singers of that era, selling more than four million records and winning multiple awards, including the Academy of Country Music’s Female Vocalist of the Year and Billboard’s No. 1 Country Female Artist.

Sylvia believes she’s now older and wiser — and happier — keeping busy with her schedule of small venue performances, writing and producing new music, and working as a life coach with people in need of guidance.

The fine line she walks as a singer and performer, she says, is that her older music is recognized, but her songs now are a reflection of soul and where she is in her life.