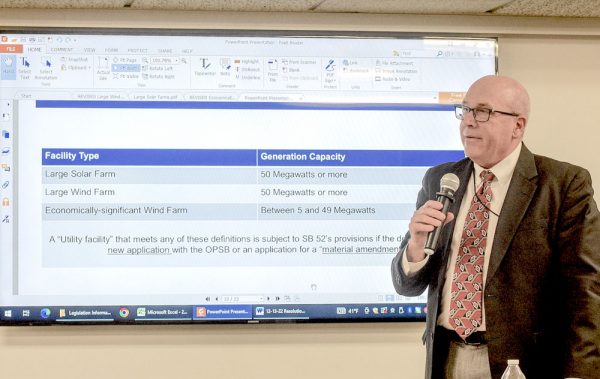 Ottawa County Commissioner Donald Douglas explained during a Tuesday, Dec. 13 public meeting that S.B. 52 is not a ban on renewable energy sources but applies only to large-scale wind and solar farms. (Photo by Sheri Trusty)

The Ottawa County Commissioners held a public meeting in the Emergency Operations Center of the Ottawa County Courthouse on Tuesday, Dec. 13 to address county response to Senate Bill 52, Ohio legislation which would permit county boards of commissioners to prevent power siting board certification of large-scale wind and solar facilities.

Rather than retain that decision-making power, the Ottawa County Commissioners opted to place those decisions in the hands of individual townships. On Dec. 13, the commissioners voted to approve the townships’ varying decisions. 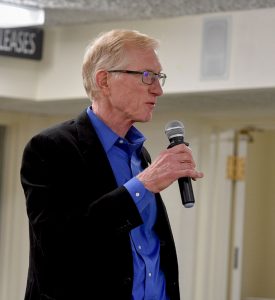 Through the resolution, the commissioners were formally accepting the township decisions. The resolution will become effective Jan. 12, 2023.

S.B. 52 addresses county control over the construction of large-scale wind and solar farms, specifically economically significant wind farms with a generation capacity of 5-49 megawatts, large 50+ megawatt wind farms, and large 50+ megawatt solar farms. Townships provided feedback to the commissioners on their decisions to restrict all, restrict some, or allow all of each type of energy farm.

While many townships opted to restrict all of the farms, some opted to allow, at least with restrictions, the construction of large-scale wind and solar farms, opening the door for what would be a long process between request for construction and project completion.

During the public comment portion of the meeting, Shores & Islands Ohio President Larry Fletcher raised questions about the townships’ final authority on wind and solar farm projects in townships that did not vote to restrict them.

Coppeler explained that wind and solar energy companies wanting to build facilities in Ottawa County would still need to work through the power citing board and notify commissioners of their plans.

“A hearing would still have to take place,” Coppeler said. 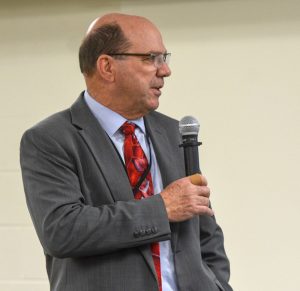 “This is not a total ban on wind and solar,” Douglass said.

Coppeler explained that individual property owners would be subject to local zoning laws, and he encouraged townships to review their zoning laws pertaining to solar panels and windmills.

In the end, county commissioners adopted Resolution 22-69 in an effort to hand to the people of Ottawa County the decision-making power that was given to the commissioners by S.B. 52.

“This was legislation that passed through the Ohio Senate. The purpose was to give people a voice in the project,” Coppeler said. “The commissioners could have unilaterally made the decision, but we thought it was more important to let the townships make the decisions.”

Maps outlining township decisions can be found at www.co.ottawa.oh.us/DocumentCenter.