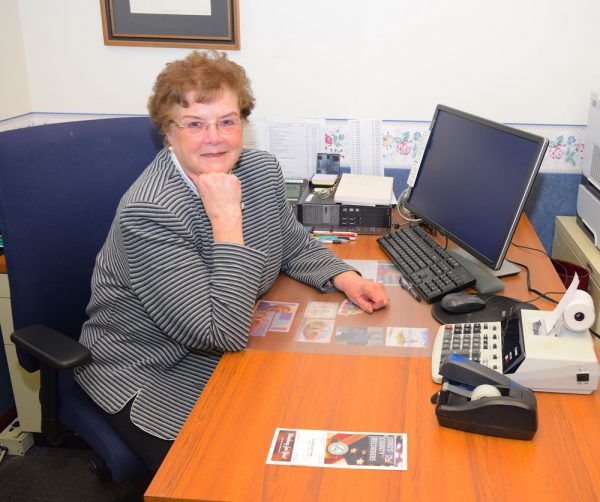 After 32 years of serving as the Ottawa County Recorder, Virginia M. Park will step down this week. (Photo by D’Arcy Patrick Egan)

Virginia M. “Ginny” Park doesn’t think of herself as just the Ottawa County Recorder, a position she has been elected to for eight four-year terms over the last 32 years.

“I consider myself a problem solver,” she said. “I’m a very detail-oriented person, a quality that I believe is essential for doing the job. When people come to me, they’re often looking for help in solving a problem with a deed, determining a property line or something to do with a property they want to buy or sell.”

It’s easy to think that being surrounded by old books filled with deeds and property maps, some going back to when Ottawa County was created, is a very dry, dusty occupation. For Park, it has been a fascinating job and full of interesting history.

“The occupation of being a recorder is derived from English law going back to the 1200s,” said Park. “The very first colonists in America had recorders, who are registrars or clerks who verify deeds, which are the ownership of property.”

In Ottawa County, every piece of property — both very large and quite small — must be accurately recorded. If one looks at a map of Ottawa County today, the original surveys have not changed.

“If you go to Catawba State Park today, you can see the marker that is the boundary of the Connecticut Western Reserve,” she said. “Moses Cleaveland, a trailblazer of the Western Reserve and who the City of Cleveland is named for, surveyed many of the properties to the east of here.”

“If you drive down Route 163, west of Oak Harbor, you’ll notice that the roads off to the north and south are about one mile apart,” said Park. “Those were originally the plat lines, and are they became many of today’s roads.”

The Ottawa County Recorder’s office has plat books from the early 1800s that contain maps that were drawn with quill pens, said Park, showing land ownership, acreage and parcel boundaries. At one time a part of Sandusky County, Ottawa County was formed in 1840, with all of the information transcribed by hand.

“Surveyors established boundaries in feet and even inches by chain back then,” said Park, with a laugh. “Those surveyors worked hard and did a very good job at the time of establishing property boundaries.”

The dean of Ohio’s recorders, Park is often consulted by county recorders from around the state because of her expertise with deeds and documents.

She has a staff of three in the Recorder’s Office, and insist that new employees are detail oriented, as well.

“Everything has to be correct, whether it is the spelling of a name on a deed, the mortgage holder or how to prepare a document.

“We can provide information, but we can’t fill out a document for anyone,” said Park. “That would make us liable for any mistakes, so we always suggest that people hire a real estate attorney and get the job done properly.”

Despite turning 80, Park briefly thought about running for her ninth four-year term in 2020.

Nathan J. Daniels was elected as recorder in November.

“I know how hard I work now,” she said. “I realized a year ago that it was finally my time to step down and enjoy myself when this term ended.”

Park will stay busy, though. She is pastor of a United Methodist congregation at Kelleys Island Zion Church, and for 28 years enjoyed penning a popular column for The Beacon, titled Beacon Bits.

Publisher John Schaffner said he was delighted “that sweet lady from Bay Township, who was so involved in the community, wrote the Bacon Bits column for so many years. It was always the most-read column in The Beacon.”