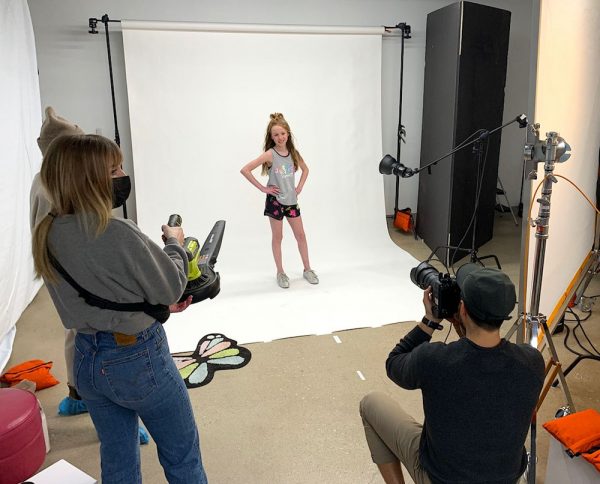 Quinn DiBucci models at the Justice photo studio in Columbus. Prior to the shoot, her hair and makeup were professionally styled by studio staff. (Photo by Emaleigh Dunn) 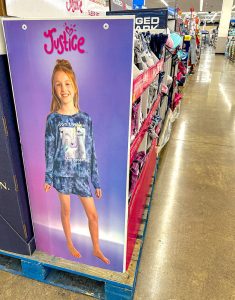 This Justice clothing advertisement in the Fremont Walmart features Danbury student Quinn DiBucci. She jokingly tells friends, “Did you know I live in Walmart?” DiBucci’s photos can also be seen on the Walmart and Justice websites. (Photo by Sheri Trusty)

Marblehead residents walking through the Fremont Walmart may recognize a familiar face in the advertisements. Quinn DiBucci, a sixth grade Danbury student, is featured on a Justice brand clothing ad in an aisle near the girls’ clothing section.

Quinn made her modeling debut thanks to her cousin, Emaleigh Dunn, a 2012 Port Clinton High School graduate who works as an assistant technical designer for Justice in Columbus.

Justice sells products exclusively on the Justice and Walmart websites and in Walmart stores. Quinni’s photos can be found on each website and in select stores.

“We were able to open our own in-house photo studio, and that opened up a lot of opportunities to shoot for our website and the Walmart website,” said Dunn. “We were told to look for girls to model. I told them I have the cutest little cousin and showed her off to all my coworkers.”

Quinn was hired for her first Justice shoot in January. She modeled about 30 outfits in the eight-hour shoot.

“She was very scared because the other two girls at the shoot were from modeling agencies,” said her father, Aaron DiBucci. “I told her to just be yourself.”

The photographers guided Quinn through the stages of the shoot.

“I was excited and scared because the other girls had already done this,” Quinn said. “But the longer I was there, the more comfortable I got.”

Quinn did so well that she was asked to return for another shoot in the spring.

“After the first shoot, the ladies told her she did just as good, if not better than, the girls from the agency,” Aaron said. “They said they wanted her back. That was a lifting moment for her.” 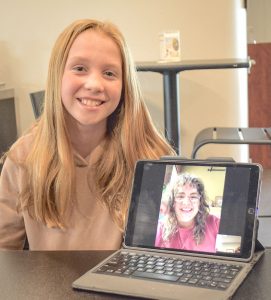 Quinn DiBucci, left, does a recent Facetime call with her cousin, Emaleigh Dunn. Dunn is an assistant technical designer with Justice in Columbus. She helped DiBucci make her modeling debut with the company. (Photo by Sheri Trusty)

Prior to the shoot, Quinn’s makeup and hair were professionally styled in the Justice studio.

“It was fun. I got to pick out my hairstyles sometimes. I chose braids one time and crimped hair with braids,” she said.

Quinn modeled a variety of clothing, including activewear, ballet outfits and summer dresses.

“She is all over the Justice website,” Dunn said.

Dunn enjoys working for Justice in Columbus, where her duties include ensuring that the garments fit properly and overseeing “the overall silhouettes of each of the garments.”

She is happy working in the fashion field within a couple hour’s drive from her family in Port Clinton.

“Columbus is the third biggest fashion hub in the United States, after New York and Los Angeles,” Dunn said. “Columbus was a natural fit for me. It’s close to home, and I can still be in the industry I want to be in.”