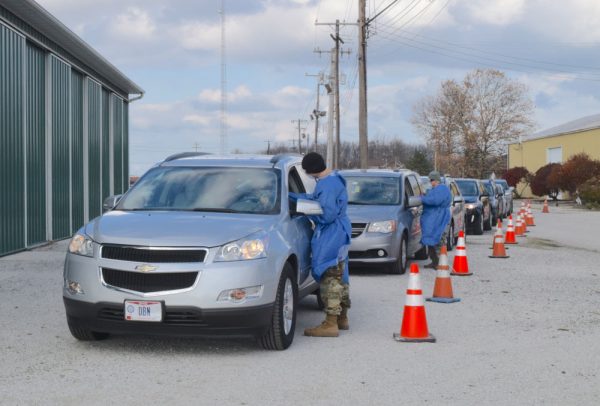 A large group of Ottawa County volunteers helped people find a place in line for pop-up testing for COVID-19 at the Ottawa County Fairgrounds. (Photo by D’Arcy Patrick Egan)

A surge in new cases of COVID-19 around Ottawa County provoked the Ottawa County Health Department and the Ohio Nation Guard into hosting a Pop-Up Testing Site on Friday, Nov. 13 at The Ottawa County Fairgrounds in Salem Township. The crowds of local residents who took advantage of the testing assured everyone it was absolutely necessary.

Afterward, Ottawa County Health Commissioner Jerry Bingham reported a surprising 566 people were tested. Everyone was ready, including the National Guard, to have the ability to test 1,000 people.

On Wednesday, Nov. 11, 47 new COVID-19 cases were reported to the Ottawa County Health Department. That pushed the active cases in the county to 857 the next day. The coronavirus pandemic in Ohio and the United States has entered perhaps its most dangerous phase, say officials.

The seven-day rolling average for new daily countrywide cases stood at 145,400 on Saturday, Nov. 14, according to data from Johns Hopkins University. That means the U.S. is adding about 1 million new cases a week, and deaths averaged 820 a day as of Saturday, a 33% increase in just two weeks. 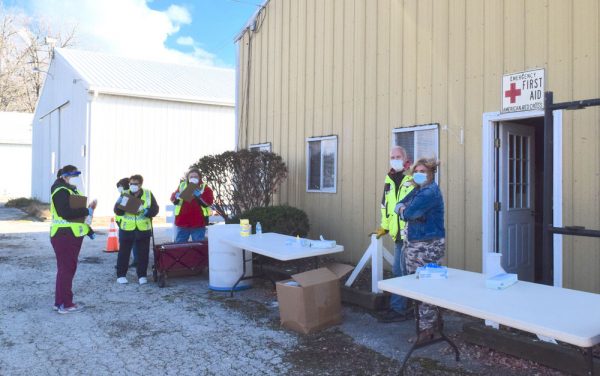 “It’s a good thing a lot of us were here early,” said one of the volunteers, wearing one of the team’s yellow vests. “The pop-up testing was scheduled for 1-6 p.m. We already had early arrivals in line at 10:30 a.m.”

With the lines of vehicles winding all around the county fairgrounds, those wanting to be tested for COVID-19 were patient. Very few left after seeing the crowds and long lines.

“The tests are free, are open to anyone who wants to be tested, and do not require a doctor’s note to be performed,” said Ottawa County Health Commissioner Jerry Bingham, at the volunteer’s table. “The results are to be available in 48 hours, or less, by checking the specific access code each person tested was given.”

Bingham said everyone who tested positive would be contacted.

This was not the first time the Ottawa County Health Department has been so proactive with COVID-19 testing. In July, officials spent the weekend at Put-in-Bay on South Bass Island, testing workers and residents after some had tested positive. Of the 984 islanders tested, 66 tested positive.