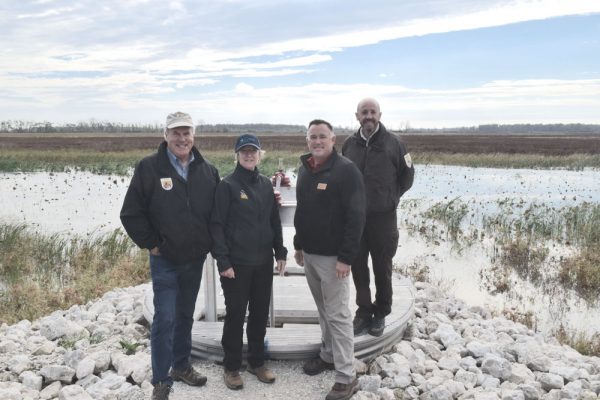 Regional Director Charlie M. Wooley of the U.S. Fish & Wildlife Service, Director Mary Mertz of the Ohio Department of Natural Resources and Mike Libben of Ottawa County’s Soil and Water Conservation District, were the first ones to turn precision cranking handles and open the gates of the Crane Creek Project. (Photo by D’Arcy Patrick Egan)

The 580-acre project area is a critical link between the Magee Marsh Wildlife Area in Ottawa County and the Howard Marsh to the west in Lucas Country. The design will reduce nutrients flowing to Lake Erie by diverting excess water from farmlands through a rugged aluminum water control structure.

The agency with boots on the ground in creating the Ottawa National Wildlife Refuge Wetland Reconnection project has been Ottawa County’s Soil and Water Conservation District, based in Oak Harbor.

“We’ve already received $1.2 million in H2Ohio funding for the project, as well working on six other sites,” said SWCD Administrator Mike Libben. “We have a lot of experience managing public and private wetlands, and this is right up our alley.”

The two aluminum control structures that state and federal officials wanted to see in action last week were ready to begin the job of allowing the massive wetlands to remove phosphorus and other pollutants from farmland runoff.

“Over the decades, to improve drainage for farm fields, landowners channelized all of the ditches in order to get rid of water really fast from flooded fields,” said Libben. “That bypassed the natural wetlands that cleansed the waters. These structures let us change that unnatural pattern.”

Regional Director Charlie M. Wooley of the U.S. Fish & Wildlife Service and Director Mary Mertz of the Ohio Department of Natural Resources, as well as Libben, were the first ones to turn precision cranking handles and open the gates, allowing Lake Erie to flow back into the wetlands.

“By reconnecting these habitats, Lake Erie will be allowed to breathe again, using these vital wetlands in a more natural ebb and flow way that will provide something both people and wildlife need — clean water,” said Wooley. “H2Ohio projects like this help us to get closer to meeting our collective goal of reducing phosphorus and improving water quality in the western basin (of Lake Erie).”

The cost of the Ottawa National Wildlife Refuge Wetland Reconnection project was $600,000.

The group invited to the ribbon cutting could see the wetlands benefit wildlife in a major way. The van driver heading to the water control structure had to slowly motor along a gravel road and dodge dozens of woolly bear caterpillars and Blanding’s turtles. As the van left on the far side of the wetlands, thousands of waterfowl took wing.

“We’ve been working hand-in-glove with the Ohio Department of Natural Resources,” said Libben, whose six-person staff will be getting another $3.8 million for wetlands work.

“We came under budget on this project, because we’re frugal with state dollars,” said Libben. “We may be a staff of six, but we make a difference.”

The SWCD makes sure Ottawa County kids know about wetlands, conservation and the environment. For the 59th year, every 5th grader in the county was hosted by the Ottawa County Soil and Water Conservation District for an educational tour in the wilds of Magee Marsh Wildlife Area, a famed birding area.

There’s a lot of “wild” to be found in the pristine marshland at the prestigious Winous Point Hunt Club on Sandusky Bay, one of the oldest duck hunting clubs in America. Thanks to club officials, the Ottawa County SWCD and a raft of other county parks and conservation groups, area school kids had the chance again this summer to experience the unique environment during the SWCD’s annual “A Day on the Wild Side.”

“If you live or work in Ottawa County, you have the chance to see Lake Erie every day,” said Libben. “We all want to make sure we’re all doing the best we can for water quality.”