Danbury edges Stryker in a thriller, 62-58 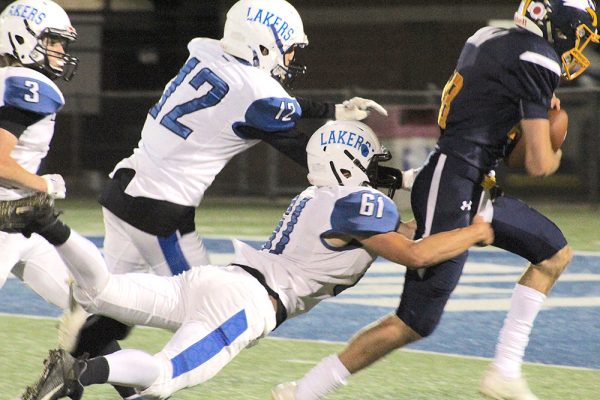 Brandon Wunder (61) and Danny Harris (12) team up to stop a Stryker runner in the Danbury Lakers’ 62-58 victory. (Photo by Ellie Mora)

STRYKER — In one of the most exciting games of the year, Danbury was able to fend off Stryker on Friday night and eke out a victory, defeating the Panthers, 62-58.

Wyatt Caskey also got in on the action, catching four passes for 94 yards and a touchdown and Danny Harris caught a 51-yard touchdown. Cade McCarthy had seven carries for 55 yards.

“We got up on them 14-0 to start the first quarter. In the second quarter, they brought it back to 14-14, and it went back and forth,” said Danbury coach Keith Mora. “We were down in the third quarter. I don’t think it ever got more than two scores apart until the finish.

“For three straight weeks, we fought. We’ve been losing at some point in those games, and we fought hard; we could be 2-3. It’s important that the kids understand how important it is to finish a football game. We were excited to get out of there with a win.”

Mora had high praise for Shortridge, who has been a force throughout the season.

“We knew there were certain things he could do offensively and in the passing game. It made more sense to do things with him out of the backfield,” Mora said. “A week ago, he had over 20 carries. We found It is a little better to pass it to him. Now we can throw it to a guy like Danny Harris. His production speaks for itself for us to move the ball around.”

It also took a great performance by Conrad, who had his best game of the season.

“Offensively, we had to pass the ball a little more. Stryker committed to stopping the run,” said Mora. “Kaden threw for 357 yards, and there were a lot of big plays.”

The game was a far cry from the first meeting between the two teams, which Danbury won, 58-12.

“Stryker showed us things that weren’t on film. I think they looked at things we didn’t do well on film and attacked that,” said Mora. “They threw a lot of passes where only one guy could catch it, and he did. They had the plan, they saw what we didn’t do well, and they worked to expose those things.”

On Friday, the Lakers travel to Holgate, which is located 89 miles west of Marblehead. Danbury won the first meeting between the two teams, 40-26.