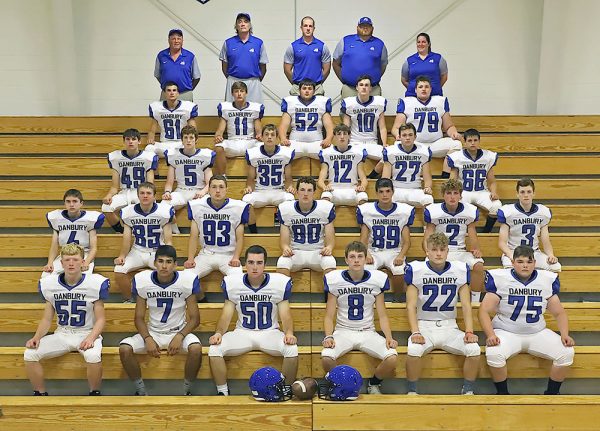 Back to lead the offense is quarterback Kaden Conrad. He will be joined in the backfield by Cole Shortridge. The four-wide set features Will Tibbels, Cody Sieger and Nate Frattaroli, plus three receivers (Danny Harris, Jake Mischler and Tommy Owens) who will see action this year.

“Kaden has picked up (the offense) very well. We began doing our quarterback reading that we do, and we do a whole system of reads. He began learning that system (in junior high),” said Danbury coach Keith Mora. “When we brought it back, Kaden still remembered a lot of things that we had been teaching him. He was able to pick up and help other kids who were just learning it for the first time.”

Thus far, Mora is pleased with how the players are getting acclimated to the new offense. In the last few seasons, Danbury made switches from the spread offense to the Wing-T to the flex bone and now the air raid.

“It’s been probably the best install of anything we’ve done. It’s because so much of what we’re doing is about giving the kids some freedom to do things that they feel are needed. We give them an area they work in,” said Mora. “When we made the Wing-T switch, we were still trying to figure out how to install the offense in August. I feel like we’ve simplified (the offense) — we’re not asking the kids to do too much with formations and stuff like that.”

Mora had high praise for his offensive line, especially Wunder and Webster.
“Brandon is such a smart guy. We’ve moved him into different roles, and he just picks things up. He’s got it between the ears,” said Mora. “He knows what he’s doing technique-wise. He’ll (succeed) by being smart, using his technique and just being a tough kid.
“D.J. has tremendous size. I think he could have a very good season for us. He’s going to continue to grow.”

Defensively, Mora and his staff want to guard against players getting worn out playing both ways. The Lakers employ a 3-5-3 defensive scheme.

The line consists of Webster (nose guard) and two ends in Overmyer and James Peacock. The three inside linebackers are Fratarroli, Shortridge and Wunder. Cade McCarthy and Brady Lenthe are the two outside linebackers. Mischler and Danny Harris are the cornerbacks and Wyatt Caskey is the free safety.