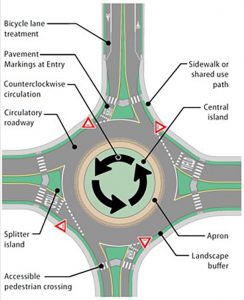 A roundabout is a type of circular intersection. Traffic travels counterclockwise around a center island. Vehicles entering the roundabout yield to traffic already circulating. The curvature results in lower vehicle speeds throughout the roundabout. (ODOT)

Danbury Township officials have been meeting the Ohio Department of Transportation experts to manage the often-crowded, sometimes dangerous intersection of East Harbor Road (State Route 163), North Shore Boulevard and Englebeck Road on the Marblehead Peninsula. While ODOT wants to install a “roundabout,” a circular intersection, Danbury Township officials would rather install a traffic signal.
“The Danbury Trustees, as well as our fire chief, police chief and road superintendent, do not oppose the roundabout concept,” said President Dianne Rozak of the Danbury Township Board of Trustees. “The amount of traffic at that intersection, though, would be too large for the location and projected size of the ODOT roundabout project.”

Rozak conducted a survey of the traffic throughout the year at the intersection and reported 1.2 million vehicles head to the Marblehead Lighthouse, there are over 700 EMS and fire truck runs; 125,000 visitors to Lakeside; 7,450 quarry stone haulers; direct access to the Kelleys Island Ferry; 320 boat/trailer and visitor parking spaces at two state launch ramps; 400 private docks; 250 hotel and motel rooms and campsites; buses and private drivers for school children; and access to stores and the local senior center.

ODOT officials said it would require major construction on Englebeck Road to install a traffic signal. Danbury Township trustees, said Rozak, believe a traffic signal would be safer, require less down time for the intersection and cost fewer tax dollars. The township has offered many times to buy the traffic signal, she said.

“We do not believe the roundabout (ODOT has presented) can safely accommodate the amount of vehicles each year,” said Rozak. “This would be the first roundabout in Ottawa County, and should not be entrusted to this location.”