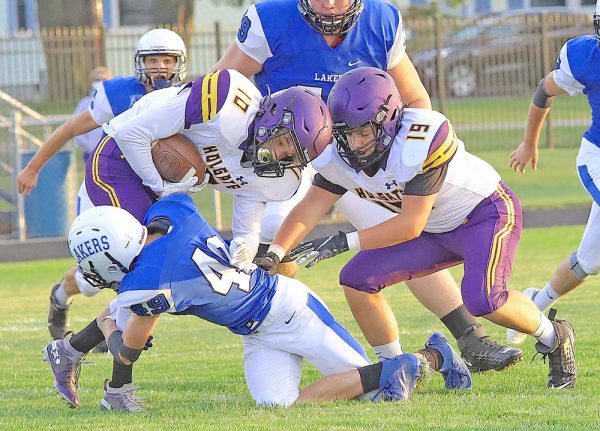 The Danbury Lakers won their third straight game of the 2020 season on Friday night with a stout defense, including Guy Maltese tackling Holgate’s Xavier McCord. (Photo by John Kozak)

DANBURY TWP. — Danbury faced its first serious test of the young season and the Lakers answered the call, rallying to defeat Holgate, 40-26.

“We left some points on the scoreboard going into the half,” said Danbury coach Keith Mora. “That was one of the things we were frustrated with, unable to convert on our two-point conversion plays. Holgate wouldn’t have taken the lead in the third quarter if we had converted on those conversion plays.”

Shortridge touched the ball 22 times and had 242 all-purpose yards.

“Cole ran really hard the entire night. He put the team on his back at times, and got us the first downs when we needed them. It was a tremendous effort, it’s been a long time coming for him,” said Mora. “We always try to motivate him by saying, ‘I don’t think teams know who you are.’ I think he’s having some of those moments. He had a great effort.”

On defense, Brandon Wunder led the team with 11 tackles and a sack. Shortridge registered nine tackles and Danny Harris finished with six tackles and one sack.

“Brandon Wunder had a strong game. He was all over the field, he made some really big plays in the fourth quarter. This is kind of becoming his standard procedure. Getting about 11 tackles per game is the norm for him,” said Mora. “The part that doesn’t get talked about much is the defensive line’s ability to keep the other team’s hands off Brandon so he can go make a play.

“We had another strong night defensively and in the run game. When you count the number of times that we were able to tackle behind the line of scrimmage or take the quarterback down, it was impressive. We allowed -78 yards rushing with the sacks. We’re trying to be a team that can stop the run.”

After falling behind in the third quarter, the Laker defense rose to the challenge in the final quarter.

“It was a tremendous defensive effort in the fourth quarter, with a fourth-quarter shutout. We gave up two touchdowns in about a minute of game play in the third quarter. That could’ve been a moment where our team turned away. We had some big stops in the third quarter,” said Mora. “We forced them into multiple punt formations in the fourth quarter. Our kids played with an amazing amount of pride. Holgate has a tough offense to deal with, they do a lot of great things.”

After a Holgate player tips a pass, Danbury receiver Wyatt Caskey makes the catch for the Lakers in a 40-26 victory on Friday night. (Photo by John Kozak) See more high school football on page 1B.

Mora believes the Lakers can clean some things up and get better.

“We’re 3-0, but we can be better. We’re always looking at film to find the mistakes.”

On Friday, the Lakers travel to face Toledo Christian. The Eagles defeated Stryker, 42-18, last week behind 562 yards of total offense.

“They’re a different kind of animal. They’re a tough team, they lost to Holgate by six points,” said Mora. “They are very different from what we are. They’re a team that can move the ball through the air at will.

“This week, it’s going to be pivotal that we control the ball. What we can’t afford is to go three-and-out and only eat up 25 seconds of game time.”