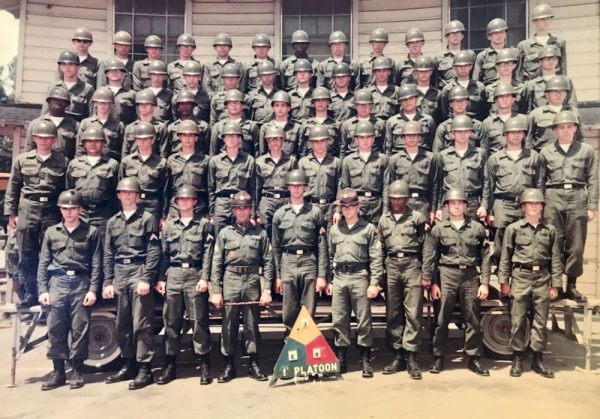 Richard Davenport’s sons grew tall on Catawba Island, just like the orchards there. The late Jim Davenport is easy to spot in the front row of his U.S. Army platoon. 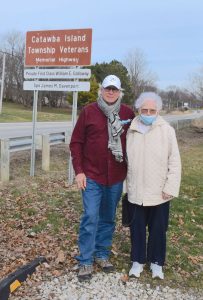 The prominent sign has been placed at the gateway to Catawba Island in front of the new West Harbor Landing canoe and kayak launch on NE Catawba Road (Route 53). For the Davenport family, whose roots reach back to the late 1800s on Catawba Island, it has been a long-sought family goal.

“We really wanted our mother, Jane, who is in her 90s, to be able to see this project come to fruition,” said brother John Davenport, a U.S. Air Force fighter pilot who is now retired.

What makes the memorial especially unique, said Davenport, is that while Private First Class Galloway was only 19 when he was killed in action in Germany in 1945, the Galloway and Davenport families had close ties.

“William Galloway was a best friend of my father, Richard, and all of the kids grew up on Catawba Island and attended Port Clinton High School,” said Davenport.

The Davenport kids — John, Jerry, Jordan and Janet — worked in the local fruit orchards with the neighbor children, picking, sorting and toting bushels of apples, peaches, apricots, cherries, plums and grapes. Young Jim Davenport, the oldest, also was a first mate on a corporate yacht, and enjoyed touring the island with the company’s Cadillac convertible to impress the girls, said his brother.

“College wasn’t in Jim’s future,” said his brother. “He was mechanically inclined, and joined the Army, where they quickly recognized his mechanical aptitude and taught him the intricacies of aviation. He was soon a crew chief, maintaining helicopters.

“Recognizing Jim’s abilities, he was asked to be the crew chief on his platoon commander’s helicopter in Vietnam. Our father was working in Korea at the time, and he and Jim had the chance to travel home together one last time for a family visit.” 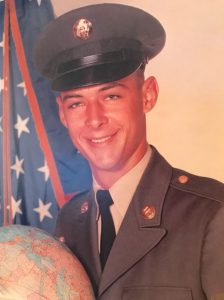 On the evening of May 18, 1969, Vietnamese solders launched a rocket and mortar attack on Camp Enari in Pleiku, Vietnam. Jim Davenport, 20, serving as an aerial gunner, volunteered to seek out enemy rocket and mortar positions. Under heavy fire, Davenport’s helicopter crashed into the side of a mountain, killing the pilot and copilot as Davenport was ejected from the burning aircraft into a nearby woods.

“Jim suffered severe burns and died in a Japanese hospital six days later,” said his brother. Jim was posthumously given the Distinguished Flying Cross for heroism, and a long list of other commendations.

Jane Davenport, 93, and surviving family members have praised the memorial.

“We’re all so very grateful Jim is being remembered this way,” said John Davenport, who is involved in a variety of humanitarian causes in retirement, plays local music venues and has created the HALO LIVE music studio in Sandusky.