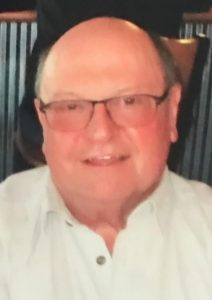 David “Dave” Andrew Drusbacky was a husband, father, grandfather, brother, uncle and friend. He left this world on May 30, at age 73.

Dave was born Oct. 22, 1948, to Andrew Drusbacky and Mable Drusbacky (Mallory) of Catawba Island. After graduating from Ohio University, he and his wife of 46 years, Jane, traveled to California where he was stationed in the Coast Guard. Lake Erie called them both back. After returning to Catawba Island, he was hired at Biro Manufacturing, where he worked for almost 40 years.

He loved being on the water, on the fairway, reading non-fiction and listening to Bluegrass. Dave found incredible joy in gifting his homemade wine and spending time with his granddaughters.

Perhaps Dave was best known for both his love of laughter and his one-liners such as “Let’s head ‘em up and move ‘em out!” and “Ya think!?”. If you had the pleasure of meeting his acquaintance, then you already know he was a memorable character not soon to be forgotten.

A private ceremony will be held at St. Joseph cemetery in Marblehead.

Please join us in celebrating his life on Sunday, June 12, from 1-5 p.m. at Catawba Island Club in the Harbor Room.