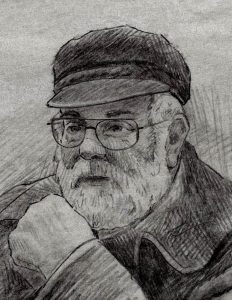 Dave graduated from Brush H.S. in Cleveland and The Ohio State University School of Journalism. He served two years in the U.S. Army then began his career in journalism working as a cameraman advancing to news producer at TV stations around the country. He was the Editor/Publisher of the magazines Lakeland Boating and Great Lakes Travel and Living.

Dave authored hundreds of magazine articles on boating and wrote nearly a dozen books including two on the Titanic. He appeared in documentaries as a Titanic expert on the History and the Discovery Channels.

Dave enjoyed everything Maritime. He held a 100-ton license from the U. S. Coast Guard designating him as a U. S. Merchant Marine Officer. In this capacity he served as a Captain on numerous vessels in the Great Lakes and inland waterways and became an instructor of the course. He taught high school students woodworking and boat building at the Maritime Academy in Toledo and lectured in multiple states on Great Lakes history.

Dave is survived by Carol, his wife of 44 years, cousins, sister-in-law, nephew, great nephew and friends he loved as family; Nancy, Jennifer, Brian and David Sparks, and Brett Babcock.

Private services will be held at a later date.