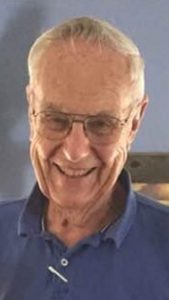 David W. Miller, 86, of Port Clinton, and of The Villages at Lady Lake, Fla., passed away on Tuesday, Sept. 7, at The Villages Hospice House. He was born on May 4, 1935, in Port Clinton, the son of the late Walter and Vernice Miller.

Dave was a Police Officer for 33 years and served as Captain of the Port Clinton Police Department until his retirement. He also served in the Armed Forces.

He was an avid boater and fisherman, enjoyed building and flying model airplanes, and metal detecting. He also worked as a neighborhood watchman in The Villages and at Toner Smart in Florida.

Survivors include his companion of 10 years, Anna; children, Shirley (Ken) Doss, Lynn (Tom) Sorg, and Julie Nicole (April) Miller; 13 grandchildren; 21 great-grandchildren; and 8 great-great-grandchildren. He was preceded in death by his wife Janette, his parents and by his daughter, Gretta.

Graveside services will be held at noon on Saturday, Oct. 2, at Riverview Cemetery in Port Clinton.