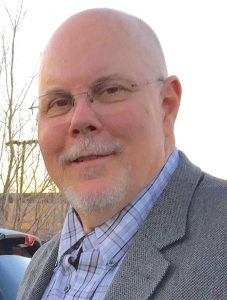 David G. Wonnell, a retired 40-year executive with USG Corporation, has been elected vice president of the Catawba Island Historical Society (CIHS). Wonnell follows William Van Der Giessen, who had held the position since the organization’s founding in 2017.

Van Der Giessen will continue to serve as a member of the CIHS Board of Trustees.

Wonnell’s involvement with CIHS began in 2017 as a member of its Advisory Council. He applied his USG strategic planning and project management experience to organizing the move of historical artifacts gifted by Catawba Island residents, Don and JoAnn Rhodes, from their closing Ottawa City General Store Museum to the Historical Society’s Catawba Museum at Union Chapel. A year later he moved from that position to membership on the CIHS Board of Trustees.

“I am a native of Port Clinton,” said Wonnell. “Ancestors on both my father and mother’s side were among the first 100 families to settle in Ottawa County. I even have a grandmother who was born in Catawba Island’s legendary Betsy Mo-John log house. The Catawba Island Historical Society was a natural vehicle for me to learn more about my own heritage, and share many fascinating stories about the area’s past with the community.”

Wonnell spent most of his professional career managing USG plants. At various times he and his wife, Port Clinton native Donna (nee) Nobis, lived in Indiana, Illinois, California and Mississippi. He retired as Director of Environmental and Manufacturing Services with responsibilities abroad in Peru, Belgium, China, Germany, England and Ireland.

“Donna is as strongly committed to advancing the Historical Society’s mission as I am,” said Wonnell. “She is the Union Chapel Museum’s Chief Docent. Docents are the volunteers who staff the facility during its May to October operating season. We rely heavily on their knowledge, energy and enthusiasm to guide guests through visits and tours.”

No stranger to volunteer activity himself, David’s other community interests are extensive. He is a mentor in the Port Clinton school system and president of the Port Clinton Artists’ Club. He served on the National Wildlife Habitat Council’s national board of directors. He has also worked with Meals on Wheels, Boy Scouts and Girl Scouts, and was a Rotarian.

“Fortunately my predecessor, Bill Van Der Giessen, remains on the CIHS Board of Trustees and can bring me up to speed on the responsibilities he is transferring,” said Wonnell. “For example, our annual membership drive has just begun and I expect to become more involved in that activity under Bill’s tutelage. We are proud of the fact that all of our Board members play active roles in managing the Historical Society and its programs.”

Membership dues are the principle funding for the operation of the Catawba Museum at Union Chapel. Two levels of annual membership are available: The HISTORIAN at $25 per year; and the CURATOR at $100 per year. A lifetime subscription to the Society’s Council of Nabagon is $1,000.

Wonnell said a brief new video introduction to the museum is available at the EVENTS tab on the Society’s website.

“For those who may have delayed visiting the Museum in 2020 because of COVID-19 concerns,” he said, “the video offers an excellent summary of Catawba’s unique history and justifies the pride and affection we have for our Island. It’s a great way to prepare for visiting us in 2021.”

You can see the introduction video and learn more about becoming a member of CIHS at www.catawbaislandhistoricalsociety.com. Additional information can all be obtained by calling 419-967-5363.