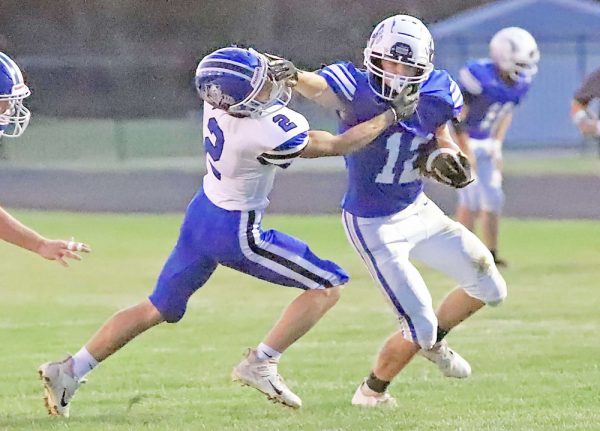 Danbury running back Danny Harris (12) scored a third-quarter touchdown to put the football game on ice against Stryker. (Photo by John Kozak)

DANBURY TWP. — A stout defensive effort and a rushing attack that accounted for all of Danbury’s 264 yards led the Lakers to a 14-0 victory over visiting Stryker on Friday night.

After a scoreless first quarter, Cade McCarthy scored on a 14-yard touchdown run, and Guy Maltese added a two-point conversion to give Danbury (2-3, 1-0 Northern 8 Football Conference) the lead for good. The win was even that much more important because it got the Lakers started off on the right foot in league play.

“This was huge for us. This was the first game that counted toward league play, so for us it puts us at 1-0 in the league going into an off week to allow us to get healthy and keep working on getting better,” said Danbury coach Keith Mora. “You don’t want to go into an off week coming off of a loss because it lingers for an additional week until you get back on the field. This win keeps us in the hunt.”

Danny Harris scored on a 91-yard touchdown run in the third quarter to give Danbury some breathing room.

McCarthy carried the ball 28 times for 149 yards and a touchdown. The Lakers, who lost quarterback Jacob Mischler to an injury, did not complete a pass.

“Cade played like the senior leader that we needed him to be. He has been our starting tailback all year, but when our quarterback went down with an ankle injury, he stepped up for us in a big way. He took some reps for us during the week at quarterback as a ‘just-in-case’ situation, so we knew he could do it,” said Mora. “We just knew that if it happened like that, we would pretty much exclusively run the ball. There were several moments where we were at a third-and-2, or were backed up deep in our own end of the field and he would go get us the yards we needed, or make the correct read and get the ball to the right player and we’d go get yards.”

Harris led the defense with 12 tackles and a sack, Elijah Hatfield also had 12 tackles, and D.J. Webster and Andy Zelms had five tackles apiece.

“Our defense played really hard. It started up front for us making sure that we were strong against the run. Danny Harris and Elijah Hatfield both had 12 tackles. When your two inside linebackers combine for 24 tackles, that’s pretty good,” said Mora. “That means we are playing downhill and getting to the ball. Our defensive backfield had a big night as well. That area for us where we’ve had some struggles this year is specifically with the deep ball. Our DB’s gave up no explosive plays through the air and that helped us close things out, not giving up a point.”