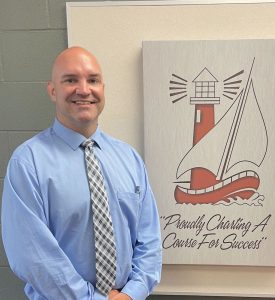 Dennis Antonelli will be recommended to the Port Clinton Board of Education at its meeting on Monday, June 13, to be the new principal of Port Clinton Middle School. He is replacing award-winning administrator Carrie Sanchez, who has taken a position with North Point Educational Service Center in Sandusky.

Sanchez will oversee the professional development for 27 school districts in North Central Ohio as their Director of Teaching and Learning.

Antonelli comes from Huron High School, where he was Assistant Principal and Secondary Academic Coordinator. He was previously the Principal of St. Mary’s Central Catholic High School in Sandusky. He is familiar with Port Clinton City Schools after serving on the Executive Council of the Sandusky Bay Conference and Firelands Positive People.

“Denny was selected over 25 other applicants for the position of Port Clinton Middle School principal,” said Supt. Patrick Adkins of the Port Clinton School District. “Denny has great administrative experience from two districts and comes highly recommended by those who have worked with him.

“We are excited to have Denny joining our team, and think he will do an excellent job continuing the excellence that is Port Clinton Middle School.”

With Sanchez at the helm, Port Clinton Middle School had gained national recognition for its unique student-centered school day schedule, and was named a National Forum School to Watch in 2019 and 2015, and a National Model School in 2017.

The new Port Clinton Middle School building opened in 2012-13 and is designed specifically with middle school education in mind, featuring large group work areas and the latest technology. That has included a building wide one-to-one initiative where every student has a Chromebook.

Port Clinton Middle School is proud of its close working relationship of both parents and outstanding teachers, said school officials. Together, they provide the quality education needed to meet the challenging needs of the middle level students.

“I have witnessed the great work Port Clinton has completed in recent years from outside the district,” said Antonelli. “When this opportunity became available, I knew I wanted to be a part of it. There are excellent leaders, teachers and families in the Port Clinton City Schools, and I am eager to work with them building upon the momentum that has been started here. This is a great place to be!”