Despite the odds, walleye fishing on fire on Lake Erie 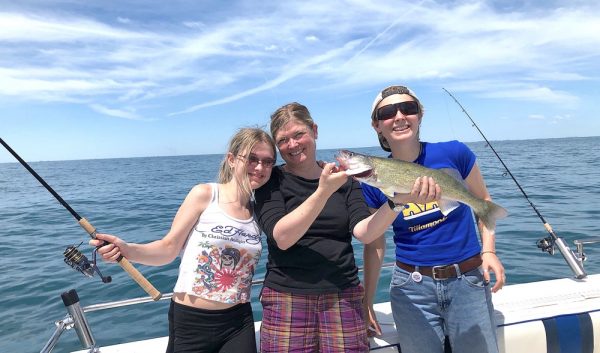 Drift-and-cast tactics and techniques for walleye have been filling coolers all around Western Lake Erie, with Weapon-style spinner rigs rounding up six-fish limits of walleye from West Sister Island to the Canadian line.

The Lake Erie walleye fishing, despite all of the odds against it this week because of winds and weather, continues to be the best anglers have enjoyed so far this year.

The true test came this week when we all watched the huge mayfly hatch erupt on Lake Erie, with the 40 mile per hour northerly winds pushing clouds of mayflies to the Ohio shoreline. Even though the plentiful mayflies were available for sport fish to graze on, as I am writing this report on Sunday night, casters and trollers alike were both on fire, despite the odds Mother Nature was throwing at them.

Casters spent a lot of time out west of the Lake Erie Islands, with very good catches North of West Sister Island up to the Canadian line. There is plenty of lake between those two spots, so there has been plenty of room for all the boaters. Weapon-style spinner rigs and nightcrawler remain to be the chosen way to go when heading out for some of those “gators,” the chunky walleye that are filling coolers from Toledo to Conneaut.

Trollers went to two different spots this week, and both were very productive. Many among of the crowds of trolling fishermen motored out to the Huron dumping grounds, and also the waters about five miles West of Kelleys Island up to the Canadian line. Tru-Trip Diving Planers with spoons — set back 35 to 70 feet — are working best. Speeds seems to vary this week. Even going as quickly as 2.6 miles per hour produced results.

Play around with your trolling speed a little to see what works best for you in triggering strikes.

Catfish are still coming in at a steady rate and it appears to us that they are loving the fresh shrimp that anglers are using to lure them in. As has been the norm lately, the Sandusky Bay has been the best spot for channel catfish with the focus being around the Edison Bridge and over towards White’s Landing.

This has overall been a great year for fishing with plenty of walleye out there to be caught in the coming days and far into the future. This wonderful season of Lake Erie fishing is looking pretty good right now.

So as always, get out there and fish. Have fun on the water, be careful and always be courteous of other boaters.