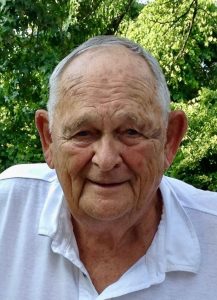 Dick Johnson, 94, of Catawba Island, passed away Thursday, April 7, at Stein Hospice Care Center, Sandusky. He was born March 28, 1928, in Cleveland, the son of Egnor and Elena Jean (Davis) Johnson. He married Evelyn Howell on May 14, 1966, and she survives. He was a United States Navy Veteran serving at the end of World War II. Dick was the National Sales Director for Central Reserve Life Insurance Company retiring in 1998. He was a longtime member of the Ottawa County Port Authority where he previously served as President. He was a member of Gypsum Community Church, Port Clinton Elks Lodge 1718 and Catawba Island Club where he was the Commodore in 1992.

Visitation will be held from 3 – 6 p.m. Friday, April 15, at Neidecker, Crosser & Priesman Funeral Home, 1124 Fulton St. Port Clinton, where memorial services will be conducted 11 a.m. Saturday, April 16, with Pastor Jim Swearingen officiating. A luncheon will be held at the Port Clinton Elks Club immediately following the services. Memorial contributions may be given to Gypsum Community Church, P. O. Box 127 Gypsum, OH 43433. Online condolences may be shared with the amily at www.neideckercrosserpreisman.com.