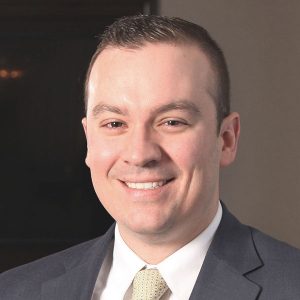 Real estate attorney Douglas “DJ” Swearingen, Jr., 32, of Huron is young, eager and ready to begin his political career on Aug. 1, when he replaces Representative Steven Arndt of Port Clinton in the 89th House District, which covers Erie and Ottawa counties.

“This is such a cool district,” said Swearingen. “There is a very high ceiling in both counties, with so much to offer. The communities of the 89th District are places where people can find a prosperous way of life, realize their ambitions and, most importantly, raise a family.”

He practices law with the Wickens, Herzer, Panza law firm, which has offices in Sandusky and Avon. He and his wife, Angie, are raising three young daughters.

“I know I will have to scale back my work load as an attorney in order to do my job as a representative, what with trips back and forth between Columbus,” he said. “The good news is that I’m still an Ohio State University sports fan, after growing up in Columbus, although I am also a fan of Bowling Green State University, where I got my degree.”

Swearingen earned his Juris Doctor Degree from the University of Dayton School of Law.

Like his father, he played baseball in high school, and was on a club baseball team at Bowling Green.“I was a decent ballplayer, but my dad, Doug Swearingen, Sr., was a star,” he said. “Dad and his brother, Dennis, were great baseball players and high school stars in three sports. They are both charter members of the Martins Ferry High School Athletic Hall of Fame.”

His father was best known for his baseball exploits, which took him to Ohio State University. He earned a spot on the 1982 U.S. National baseball team, which participated in South Korea and won the bronze medal, and was eventually drafted by the Seattle Mariners.
Swearingen is a runner, and has his sights set on competing in the Nationwide Children’s Hospital Columbus Marathon & Half Marathon on Oct. 20. He is also a golfer, and a family man.

“When I was leaving our house for Columbus to appear before the House Majority Caucus, I looked back to see my little girl, Mary Clare, happily waving out the front window,” he said. “That’s the type of thing that makes you want to help this district be a great place to raise children.”

Born in Fairmont, W. Va., Swearingen grew up Columbus. After getting his law degree, Swearingen said he had plenty of job offers. One of his initial interviews was with his present law firm, which quickly became his first choice.

“When my wife and I came to the Erie County area, we were blown away by it,” he said. “It is an incredible place to live and work, the cost of living is affordable and the community is great. It’s usually the other way around, with people wanting move to the big city to find success.”

Swearingen will have to wait until Arndt officially retires on July 31 before being sworn in on Aug. 1.

“I’m privileged just to be a part of the process,” he said. “My goal, first and foremost, is to visit the communities (of the 89th District) and have conversations with the people. I think the biggest mistake a politician can make is to say that you know all the problems and have all the answers.

“In reality, I should be a conduit in Columbus for the people in my district, and listen to their wants and needs.”