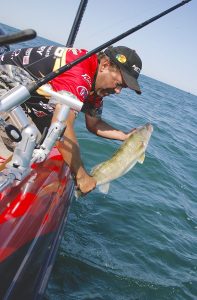 The local Lake Erie fishing has remained the same this week with a lot of the same hot conditions still in play. Fishing overall has slowed down, as it does every year at this time.

Everyone is out fishing for yellow perch and getting some of the green and gold favorites, but just not limit catches. As coolers of fish continue to come into Bay’s Edge Fishing Cleaning, the guys who are filleting everyone’s catches have noticed huge amounts of those pesky fleas in the bellies of the perch that have hindered our perch fishing in the past.

But, the good news is people are still catching perch.

The best spots for perch fishing have been Rattlesnake Island, North Bass Island and west of West Reef. Those areas have the best water depths which are 30- to 31-feet of water. There have also been perch being caught between Can E and Can F around the Niagara Reef complex. The water depth in those locations has been a little bit less than those of the other areas I had mentioned, with the depths being between 25 and 26 feet.

Walleye fishing has remained excellent for those anglers who are trolling. The dumping grounds off Cedar Point are still the favorite location and producing the best catches in this area. Fishermen have found that Bandit and Reef Runner lures weighted with a two-ounce barrel sinker on the line have been working best.

When we use the weights with the Bandits, Reef Runners and other diving plugs, what we do is have six feet of separation between the barrel sinker and swivel, followed by the six-foot leader and crankbait. The best trolling speeds to have been 1.8 to 2.2 miles per hour.

Drift and cast walleye fishermen have had luck working lures around the shallow rock piles. Gull Reef, north of Kelleys Island, is usually one of the top fishing holes when we have a good day.

Catfish are still proving to be a strong, steady species. All throughout the Sandusky Bay the channel catfish have been prime catches. Raw shrimp seems to be the main bait to use.

As we start to wind down the season and heading the fall fishing, the report has remained the same. Seasoned fisherman have said that we need the water to cool down in order for all of the species to fire back up.

In closing this weeks report, I want to say thank you to all the businesses and residents in the area. We have been able to keep our COVID-19 counts low and still have had a decent summer to hep us survive in these trying times. It still amazes me how many people that have wanted to come to our area to live and play despite the many obstacles we have had.

Quick news flash: As I was writing this, Misty called to let me know that as of Sunday, she had gotten a couple good reports of good fishing off of L Can in the shallower waters of the reef complex off Camp Perry and Port Clinton.