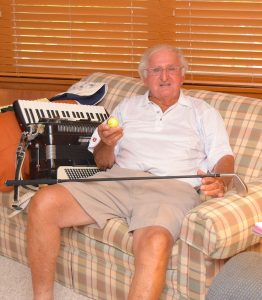 Don Gresh, 88, shows off a golf ball he retrieved after shooting his memorable seventh hole-in-one while recently playing at Oak Harbor Golf Course.

Don Gresh has been known around town for decades for his talented accordion, friendly and generous personality and his golf prowess. The 88-year-old from Port Clinton moseyed on down to the Oak Harbor Golf Course recently, where he had already collected a trio of hole-in-ones in a stellar golf career.

“I was using a 24-degree hybrid golf club, but it was unique because it was kind of a slam. I’d finally aced each of the four par 3 holes at Oak Harbor,” said Gresh. “I’d also had a hole-in one at Sycamore Hills Golf Club, and a couple of them at Fremont Country Club.”

Gresh, who was born in Marblehead, is a Korean War Veteran, and is a long-time Port Clinton resident, remembers when he started playing the Oak Harbor Course. A 5-handicap golfer, which only about 1% of golfers achieve, Gresh was retiring as purchasing agent for Biro Manufacturing, where he worked for one of his best friends, Elmer Biro.

As a retirement gift he was given a gift certificate for the Oak Harbor Course, which he had never played.

“I enjoyed the course so much, friends and I created the Oak Harbor Senior Golf League. Over the years, I managed to ace three of the four par 3 holes, and now I’ve got them all.”

Gresh was also well-known at the bars and social halls around Ottawa County. When he was just 8 or 9 years old, he picked up an accordion, the perfect instrument for a Slovak boy living in Marblehead. He played with the Polka Dots band from 1972-1994, and also entertained at nursing homes, family parties and even Put-in-Bay during his long career.

In 2012, though, his wife Margaretta, who had worked for years with the Ottawa County Municipal Court, suffered a stroke. Gresh put away the golf clubs and the accordion, and devoted himself to her care until Gretta died in 2018.

In his mid-80s, Gresh decided to see if he could revive his golf skills.

“I didn’t want to play if I couldn’t hit it well any more. So I grabbed some scrub golf balls, headed for the range and pretty soon I was playing golf with friends again.”