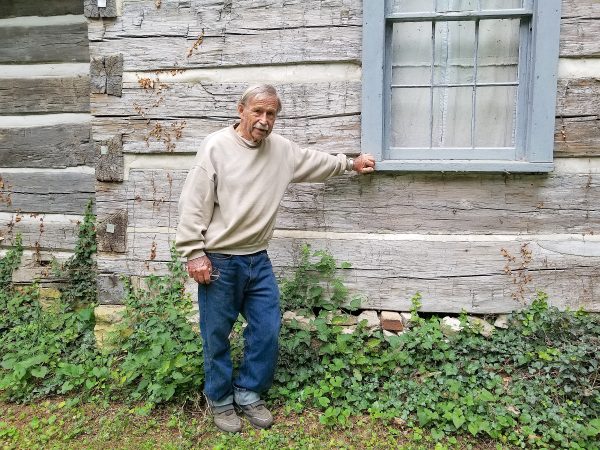 Don Rhodes, soon to be 89 years old, is still an active Catawba historian.

Catawba historian Don Rhodes will not turn 89 until this summer. He has, however, just received an early birthday gift from his fellow members of the Board of the Catawba Island Historical Society. Rhodes was elected Emeritus membership as a lifetime Trustee of the organization.

Rhodes was born in a small wood-sided building that used to be a White Horse gas station his father built on NW Catawba Road, not far from the entrance to what is now called the Sunnyside Tower Bed and Breakfast Inn.

With the exception of serving four years as a U.S. Navy submariner during the Korean War, he has lived his entire life on Catawba Island. He and JoAnn, his wife of 67 years, have spent well over a half century at the corner of NW Catawba Road and East Porter Street. It is the first and only residence they have owned since their 1953 marriage at Little Chapel Around the Corner in Las Vegas, Nev.

The Rhodes property was once part of Ottawa City, a community created to support a cement company established in 1850 just inside today’s north gate of the Catawba Cliffs neighborhood. The company failed after only five years. Ottawa City was disincorporated in 1863 but can still be seen on old maps.

Most people recognize the Rhodes residence because the main house, constructed in 1905, is flanked by a log home and several other rustic outbuildings. These additional structures provided a showcase and storage for the eclectic collection of local antiquities and memorabilia Don and JoAnn acquired over decades. They displayed and sold them under the banner of Ottawa City Museum and General Store, a business they opened on site in 1976. It operated for 40 years.

“I started acquiring in the mid 1950’s,” reminisces Rhodes. “I was interested in items that told stories about everyday life. It was just personal curiosity. I never guessed that one day my collection would find its way into a museum.”

That is exactly what happened, though.

Artifacts ranging from a huge antique grape press, to a bathing suit once rented at Gem Beach, to the first “Take a Peach to the Beach” sign, can now be found at the Catawba Island Historical Society’s Museum at Union Chapel. Those and most other items displayed at the Museum were accumulated and subsequently donated by the Rhodes.

Bill Van Der Giessen, Vice President of the Historical Society, was an early organizer of efforts to keep the Rhodes collection intact and available for public viewing. He noted that, “The Historical Society, with Don and several other community-minded individuals as elected Trustees, was created in 2017 to help preserve Catawba’s heritage. Catawba Island Township, owner of the Union Chapel building since 1992, joined the effort shortly thereafter. It generously renovated and offered the 1888 structure for use as a museum to house the Rhodes artifacts and share the Catawba Island story.”

The Museum opened in June 2018. Initial exhibits told of ice harvesting in Sandusky Bay and near the Lake Erie Islands. Most of the tools and industry accoutrements displayed belonged to the Rhodes.

The following summer, the theme of the Museum was expanded to “A Timeline Tale of Catawba.” Visitors were invited to walk through history from Catawba’s geological birth to its current prominence as a recreation mecca and sportsman’s paradise. Again, most of the artifacts were gifted by the Rhodes.

“Without the efforts of the Rhodes, much of Catawba’s history would probably be lost,” concluded Bill Van Der Giessen. “Don’s fellow Historical Society Board members wanted him to know how much we value what he has done to preserve the Island’s story. Making him a lifetime Emeritus Trustee was one way we could demonstrate how much we appreciate his contributions to our community.”

Another of his contributions was the many years Rhodes served as a member of the Catawba Island Township Volunteer Fire Department. The organization was created in 1949 and he was one of its founders. The bronze statue in front of the fire hall on Cemetery Road was created in his likeness.

Catawba Museum at Union Chapel is tentatively scheduled to open for the 2020 season on May 16. The opening could be delayed depending upon then current state and federal coronavirus mitigation requirements. Typical operation is Monday, Wednesday and Thursday from 10 a.m. to 4 p.m., and the second and fourth Saturdays of each month, until mid-October.

There is no admission charge. The cost of operating the Museum is in large measure underwritten by dues paid for membership in the Historical Society. For more information about the Museum, or becoming a Historical Society member, call 419-967-5363 or visit www.catawbaislandhistoricalsociety.com.

And if you see Don Rhodes, don’t forget to congratulate and wish him a happy birthday!