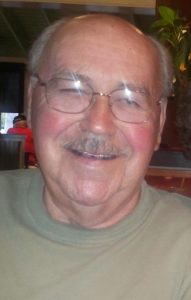 Donald J. Basil, 84, of Catawba Island passed away Thursday, May 19, at Edgewood Manor Health Care Center, Port Clinton. He was born Dec. 9, 1937, the son of Joseph and Dorothy (Reed) Basil. He married Barbara Hill and she preceded him in death. He married Lois Russo on June 29, 1987, and she survives. Don was a bricklayer for Local 55 and a veteran of the United States Army Reserves. He enjoyed fishing, boating, playing cards and playing dominoes.

He was preceded in death by his first wife: Barbara, parents and brother: Ronald Basil.

Funeral services will be conducted 11 a.m. Saturday, May 28, at Neidecker, Crosser & Priesman Funeral Home & Cremation Service, 1124 Fulton St., Port Clinton, where visitation will be held from 10 a.m. until the time of the service. Private graveside services will be held at Green Lawn Cemetery, Columbus. Online condolences may be shared with the family at www.neideckercrosserpriesman.com.