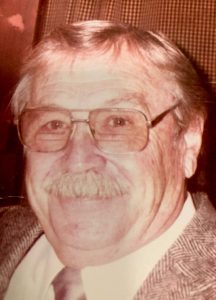 He began his school years at Catawba Island Elementary School and Graduated from Port Clinton High School in 1949. That same year, he became one of the charter members of the Catawba Island Volunteer Fire Dept. serving the community and supporting the department throughout his life. He could still be seen flipping chickens at the annual CIVFD Chicken BBQ, well into his 80s.

Don served in the United States Navy from 1950-1955 and was on the submarine, USS Sterlett. In 1953, he married his wife, Joann (Perry) Rhodes and she survives.Following his military service, Don was employed by NASA (National Aeronautics and Space Administration) at the Plum Brook Station in Sandusky until it’s shutdown and then at Toledo Edison’s Davis Besse Nuclear Power Facility until his retirement.

In 1978, Don and JoAnn opened Ottawa City General Store (and Museum) as a way to preserve and pass on his passion for local history, antiques, and artifacts. Don could be found, sitting for hours telling stories and sharing his wealth of knowledge. The General Store remained open for 47 summers. Upon its closing, Don was instrumental in establishing The Catawba Island Historical Society, contributing a large portion of his collection to the museum in hopes that the history of Catawba Island would live on.

Don was preceeded in death by his Parents, Elba (Johnson) and Luther Rhodes, Brothers, Richard Davenport and Robert Rhodes.